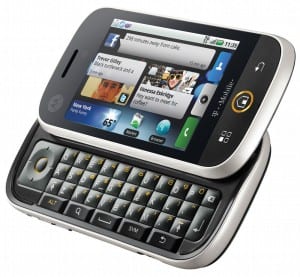 Every day it seems like there’s another social network you need to keep updating. We’ll freely admit that should you try to keep up with all of them, it can get overwhelming. While there are sites like Friendfeed which aim to collect all of your social network happenings on one website, you’re still tied to your computer to be able to keep tabs on your friends.

But now, Motorola is introducing the Cliq with Motoblur, which allows you to update, post, and read everyone on all of your social networks all on the homescreen of your phone.

Motoblur is Motorola’s first offering built on top of Google’s Android phone OS. Motoblur is the “solution” that allows you to post to Facebook, Twitter, MySpace, Gmail, and last.fm. Content is delivered to the home screen of the phone in different categories to let users better handle the stream of information. 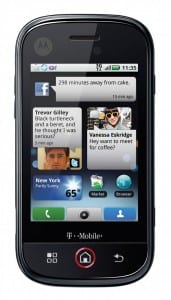 Updates, including statuses, wall posts, and friend feeds from social networks are delivered to the “Happenings” box, while email and networking messages are delivered to the “Messages” box. You can update all or some of your networks from the “Social Status” box, and an RSS feed reader will deliver headlines to your home screen.

The underling Android system allows tight integration between Google’s offerings, including Gmail and Google Calendar, as well as contact syncing with your Google account.

The Cliq phone itself is packed with 3G and A-GPS, wi-fi, a 5 megapixel camera, a slide-out QWERTY keyboard, and a standard headphone jack to let you listen to music or stream last.fm playlists. The Cliq doesn’t have an official release date other than “fourth quarter” from T-Mobile. Definitely looks like something to add to the Christmas list.