Disney announced the official title for the fourth movie in the wildly popular “Pirates of the Caribbean” series, MTV.com reported today.

At the D23 fan convention in Anaheim, Cal., Walt Disney Studios Chairman Dick Cook looked into a crystal ball to reveal the next title: “Pirates of the Caribbean 4: On Stranger Tides.” Johnny Depp was there in character as Captain Jack Sparrow – “sailing” in on a pirate ship and asking for rum. 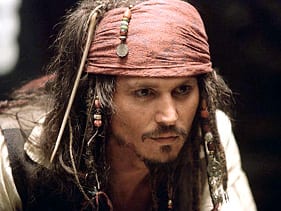 Depp returns to the “Pirates” franchise as part of a deal with Disney ensuring he would also be able to pursue a passion project: “Gonzo: The Life and Work of Hunter S. Thompson.” Whether or not Kiera Nightley and Orlando Bloom, however, still remains to be seen. Both have suggested in the past that they will not be back for a fourth movie.

“Stranger Tides” aren’t the only thing in Disney’s crystal ball.

After an updated performance of “The Rainbow Connection” by the Muppets, Cook announced a new Muppet movie: “The Cheapest Muppet Movie Ever Made.”

Nicholas Cage made an appearance for two reasons:

John Travolta arrived, along with wife Kelly Preston and daughter Ella Blue Travolta, to enormous applause. It was their first public appearance since Jett Travolta’s untimely death. Cook then announced that Travolta, Tim Allen and Martin Lawrence would all be involved in “Wild Hogs 2: Bachelor Ride.”

Riding the fresh wave of Beatlemania that followed the release The Beatles: Rock Band, Disney is also planning a “Yellow Submarine” movie. “You’re going to see Pepperland and the Blue Meanies as you never have before,” he said. “And the greatest soundtrack of all time.”

Guillermo del Toro is working with Disney to help them get a little scary in a project called “Disney Double Dare You.” The first of the movies will be called “The Troll Hunters.”

Cook talked about Andrew Stanton’s upcoming, potential trilogy “John Carter of Mars” and called it “a new Disney franchise for years and years to come.”

Other appearences included Robert Zemeckis, Jerry Bruckheimer, Tim Burton and Miley Cyrus, and never-before-seen footage was shown for “Alice in Wonderland,” “The Prince of Persia,” “Tron: Legacy” and a sequel to “Earth” called “Oceans.”