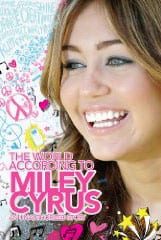 “The World According to Miley Cyrus” poses the question asked daily by celebrity bloggers and journalists: “is she capable of staying on the straight and narrow as her star continues to rise?” This DVD tries its hardest to convince the viewers that the young Disney starlet will not be led astray.

With the influence of father Billy Ray Cyrus, godmother Dolly Parton, and wholesome Christian values surrounding her, the film portrays Miley as a girl with a good head on her shoulders. “I’m in the good girl category and that’s where I want to stay” she says on the likelihood of her going the way of other former teen queens. The usual examples of Britney Spears and Lindsay Lohan as Disney girls gone bad are paraded out in comparison.

The World According to Miley Cyrus: An Unauthorized Story
63 minutes
September 29
[rating:2/4]

Rumors and gossip aside, the 16-year-old who shot to fame as Hannah Montana has been successful at building a solid career foundation for herself in show business. What she’s been particularly successful at is breaking away from her Disney persona. Miley is now very much a star in her own name instead of just the title character from her show. The character name shot her to fame, then through the show’s soundtracks Miley was able to sing as herself. With the Best of Both Worlds Tour, she performed both as Hannah and herself, inching toward completely breaking away from the persona. With the release of her first non-Hannah album “Breakout,” she further ensured a life in the limelight after the show’s end.

However, this film will leave viewers with several questions that have nothing to do with Miley’s future well-being. Why such poor audio quality on most of the interviews? People sound like they’re speaking through a tin can, and poor Emily Osment sounds like a chipmunk. Viewers may also wonder why they’re given a separate biography of Dolly Parton’s entire career. I additionally would like to know why the same clip of Tyra Banks running through a crowd of fans is shown over and over.

The bonus features have nothing to do with Miley Cyrus at all. They’re mini biographies of Chris Brown, Dakota Fanning, Vanessa Hudgens and Zac Efron. No attempt to connect these young stars to Cyrus is made at all other than mentioning that Efron and Hudgens are also Disney stars. Curiously enough, Hudgens’ nude photos that were leaked to the internet are mentioned, but not one word during the whole film about a similar scandal involving Cyrus and her scantily clad pictures that were also leaked online earlier this year.