SEATTLE — The Penny Arcade Expo gave me my second taste of Nostalgia, Matrix Software and Ignition’s latest Nintendo DS RPG. After a hands-on go with it at Comic-Con in San Diego and a hands-off demo at PAX, I feel like I’ve got a pretty good handle on what the game is offering, and I like what I know.

You play as Eddie, who is searching for his father in a semi-real, semi-fantasy world. You will visit real world locations such as Cairo and London, but with that embellished, fantasy vibe to them–for example, when you’re in the pyramids in Cairo, you will be attacked by mummies and monsters, and you will fight them off with magic, guns and swords. +1 for going the 19th century, alternate reality‚  steampunk route. 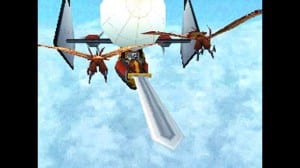 While there are four main characters in your group, there will be other characters you can use at different times in the game, so you get to switch things up a bit as you play. In addition to your standard turn-based battle system (attack, magic, skills, etc.) there are also airship battles. Enemies attack you from all directions while in your airship, and you have to fight back using cannons and weapons attached to the front of your ship. Depending on the placement of the enemy, certain characters will perform better against them–you will want to use a cannon on the side to attack an enemy on your left, for instance, while one directly in front of you is a perfect target for the sword jutting out of your hull.You are graded for your skill in battles, so you will want to figure out the best strategy for tackling opponents in order to secure the best grade. 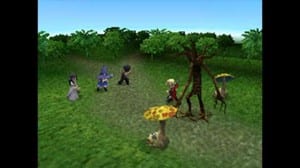 The airship is used to travel long distances–in the demo, you had to set out from London to Cairo, and since both were in the proximity of their real-world location, finding your destination is not a difficult process (unless you failed geography, of course). The airship is also fully customizable as well, and there are more than one of them to fly around–later airships bring you higher and higher, but the higher you fly, the more difficult your opponents will be. Not only do you have to contend with monsters, but other airship owners–many of them sky pirates–will give chase as well.

It’s tough to gauge how entertaining an RPG can be from just 15-20 minutes of gameplay, but what we do know about Nostalgia looks promising. The game is slated for an October release, and you will want to clear some time off your schedule to play it–without even tackling sidequests, the story is upward of 30-40 hours, which is very long for a DS RPG. We’ll have more info for you as the game nears release, and also a review for you once it hits retail.