A brand new stylish and wireless drumset and a sleek Iron Maiden modeled guitar await Wii gamers, while Xbox 360 fans are treated to a fully collapsable and performance-ready drum kit.

Logitech hears you, Wii gamers, and did not skimp on production value for the guitar, as it is crafted with the exact same materials as its Xbox 360 and PS3 companions. You’re getting a maple neck, rosewood fingerboard and full-on metal frets. Aesthetically, the guitar has a white body with a black pickguard with realistic looking humbuckers and whammy bar. 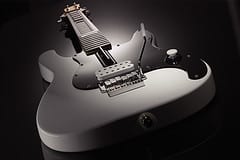 Additionally, the drumset features adjustable drum pads and cymbals and utilizes a recessed rim design making it easier for the living room rocker to earn high scores and avoid those lousy accidental rim shots. The kick pedal is built with stainless steel and promises a “durable, responsive experience.” The Xbox 360 drumset fits the previous description word for word and only differs in its sans-Wii Remote nature. 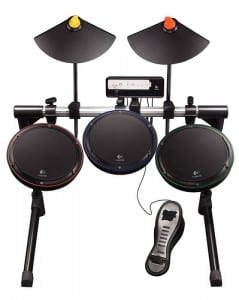 Your Wii remote easily snaps into both the guitar (in the back where, thankfully, it cannot be seen) and the drum kit (awkwardly placed in front). Now for the damage. The Wii Logitech guitar will set you back $199, while the drum-set will run you $229 (Xbox 360 too).

Logitech neither confirmed nor denied compatibility with Rock Band games, but when we hear, you’ll hear. 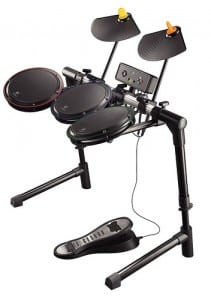