Ten years ago today, the Sega Dreamcast was released in North America. It was the first system released in the sixth generation of consoles (the 128-bit era), and also the first to exit the market. Not only was the console well ahead of its time, and helped to innovate on the home console front in ways we may take for granted today, but it also disappeared from stores well before its time, and before it could build an even larger library of quality titles.

The Sega Saturn was not doing very well in North America, as both the Sony Playstation and Nintendo 64 were overpowering it at retail. Sure, the original Playstation helped usher in an age of cheaper games with its CD-based titles, and it also sported one of the deepest libraries of any console to that point, but the Nintendo 64 was able to hold on thanks quality over quantity; this was a system with a few titles that are still, to this day, considered some of the greatest and most innovative of all-time, and that sort of thing helps you stick around even with something as powerful as the Playstation leading the pack. The Saturn, on the other hand, failed to recapture the glory Sega knew during the Genesis/Mega Drive’s heyday, and instead turned into an import machine with a large portion of the best titles releasing overseas and never in North America.That’s not to say it wasn’t a quality system, but it just couldn’t keep up with the other two. 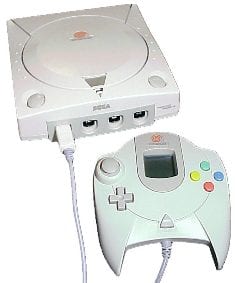 Once you got used to the shape of the controller, it worked pretty well. It also looks to have inspired Microsoft's first console controller, as well.

The lifespan of the Saturn was short, as Sega moved in to create a system much more powerful and more unique than what was available on the market. The Dreamcast would release in 1998 in Japan, and on September 9, 1999 in North America. The system had a funky but memorable controller, memory cards that doubled as portable mini-game systems, and one thing that no other home console had to that point: a working, viable, and entertaining online infrastructure. In fact, the success of the Dreamcast’ online play was one of the reasons the rest of the consoles of that generation implemented online features, though the Dreamcast was the first to ship with a built-in modem that ran at 56 kbit/s. It didn’t seem slow at the time, okay?

The launch of the system was very successful in North America; just four days after launch, the system had sold 372,000 units. A strong launch lineup was part of the reason for this–you had Sonic Adventure, Soul Calibur and Power Stone, at least two of which people still obsess over to this day, and when you look back, Sonic Adventure wasn’t so bad either, at least for a 3D Sonic title. While EA Sports did not support the system, Sega Sports titles, made by the team that would eventually become 2K Games, helped to fill that void, so the Japanese-based system was able to maintain a strong foothold overseas with the North American, sports-loving audience.

Just like the GameCube was for Nintendo, the Dreamcast was Sega’s system during some of the most creative moments in the company’s history. Titles like Shenmue, Jet Grind Radio, Samba de Amigo, House of the Dead, Phantasy Star Online, Crazy Taxi, Skies of Arcadia, Chu Chu Rocket and Space Channel 5 were all Sega published or developed, and many of them have found sequels or remakes on other consoles due to their excellent gameplay and appeal. A few of them–namely, Skies of Arcadia and Shenmue–have large cult followings that demand additional sequels in order to flesh out the universe they created way back when, or to give the series some much needed closure. Third-party support was also excellent: you had the aforementioned Power Stone and Soul Calibur, from Capcom and Namco respectively, but you also had Resident Evil, Street Fighter and Marvel vs. Capcom from Capcom, cult-classics like MDK2 from BioWare, and niche titles like Bangai-O from Treasure. Games like Bomberman Online utilized the online features of the Dreamcast to put a new spin on an old franchise, and in some instances, such as with Quake III, online play continues to this day on the system, though not on any servers run by either id or Sega. 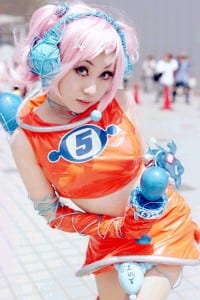 The creation of Space Channel 5 also meant Ulala cosplay was created, and for that, we are thankful.

These beloved series are part of the reason the gaming community holds the Dreamcast in such high esteem now. The system, despite its strengths, was killed off by the Playstation 2, which released shortly after the Dreamcast. The PS2 had plenty of original Playstation owners hungry for the next big thing from Sony, and when word got out that the console would include a DVD player–something that was very expensive 10 years ago–people went nuts, and many decided to hold off to pick up a PS2 when it released. The Dreamcast may have been able to survive if it was just facing off against the PS2, but in 2001 both the Nintendo GameCube and Microsoft’s first dip into the console market, the Xbox, were slated to release. With that uphill battle on the horizon, Sega of America announced on January 31, 2001–in a decision made by Sega of Japan, according to former Sega and current EA Sports head Peter Moore–that production of the Dreamcast hardware would stop, though the titles that were still in production would still see the light of day.

While the Dreamcast continued to see development of titles in Japan, where the Xbox was not as much of a threat, licensed production in North America ceased. While homebrew titles were and are still a big deal on the Dreamcast thanks to free development kit software, legitimate, retail support of the system ended with the last generation, and Sega called it quits on the hardware market, instead turning their attention to becoming a third-party software giant. While it at first seemed odd to see Sonic on a Nintendo console, now we have games where Sonic and Mario compete against and each, and sometimes even *gasp* work together.