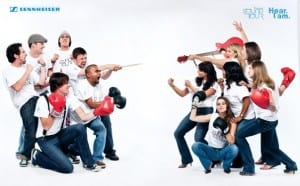 icole Cullop is used to traveling across the continent to compete against guys, yet her most recent venture against the opposite gender was a bit different than her usual escapades.

Cullop, or LethalxPrincess as she’s known to many, is a pro-gamer by trade. For years, Cullop crisscrossed the nation with Major League Gaming (MLG) immersing herself in a cutthroat world while breaking stereotypes in the process. Her squad, Team Foxy, is considered the top female team in the gaming community.

Not surprisingly, it was actually gaming that connected Cullop to the Sound Tour. Sponsored by the popular headphone company, the tour, which we previously told you about, is a reality show pitting Cullop and a team of four other female contestants against a squad of all men.

“I heard about the Sennheiser Sound Tour through the gaming community. Sennheiser is a great product that is highly recognized for its quality in the professional gaming world. When the tour was announced, the word spread quickly in the E-Sports community” Cullop recalled. 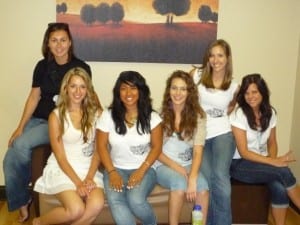 With the ultimate goal to promote the Sennheiser headphone product base, the two teams have spanned North America participating in a variety of challenges. From meeting celebrities to getting on tour buses, Cullop admits it’s been a whirlwind ride.

“Personally, there are many highlights of the tour that I have enjoyed such as traveling, experiencing new communities, and meeting new and exciting individuals” said Cullop. Ever the gamer, she admits that for her personally, the best part of the tour has not been meeting a person or going to a particular place, but rather it’s been a simple truth.

“The biggest highlight of the tour so far has been the fact that the girl’s team is in the lead. We have won three challenges and the guys have only won one. I am a very competitive individual and I am confident we will take home the grand prize” she confided.

Along the way, both teams have been faced with the challenge of going up to people on the street to promote Sennheiser. While in some cases they’ve been shut out and rejected, most people have been willing to step in front of the camera according to Cullop. 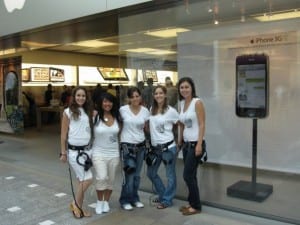 “Generally people are accepting and don’t mind the camera, we actually seem to get better responses if the cameras are out and rolling. I think people want to know what’s going on with the cameras, the tour, and the product” said Cullop.

One of the Sennheiser girl’s most memorable visits was their trip to Boston. Between crashing a few weddings, visiting the Salem Witches Cottage and partying it up outside the Paul McCartney Fenway concert, the ladies got their fill of Beantown. Cullop says it was easily one her favorite places on the tour.

“My time in Boston was amazing; I literally fell in love with it the moment I arrived. Boston is now on my top five places to move. What I remember most about Boston was the atmosphere in the air, I went to Fenway Park, Faneuil Hall, and shopping on Newbury Street. Everywhere I went people were alive with spirit; they were helpful, and even entertaining. I would love to live in an area like Boston because it has so much to offer” she said. 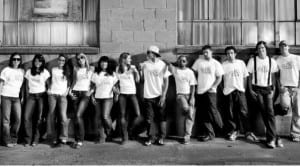 With the tour winding down, Cullop admits she misses her Xbox, controller and gaming in general. Save for a few hours of gaming in NYC, she has not gotten a chance to play much while on tour. Despite this, Cullop contends she wouldn’t trade her Sennheiser Sound Tour experience for anything “" or any game “" in the world.

“The one thing I will bring away from this trip is the experience. No matter how the team does and no matter how I personally do in the competitions, I will always remember the new places, people, and experiences I have encountered along the way” concluded Cullop.