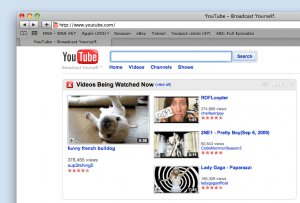 Last Wednesday, YouTube began talks with Lions Gate Entertainment Corp., Sony Pictures, and Warner Brothers concerning a movie rental service similar to iTunes and Netflix. This would mark the first time ever that the Google owned video site would charge for content. The fee would also be similar to the other video services, charging around $3.99 a rental.

YouTube is also in talks with many other partners in an effort to shore up its offerings of professional grade content, which advertisers prefer.

“We hope to expand on both our great relationship with the movie studios and the selection and types of videos we offer our community,” said YouTube spokesman Chris Dale.

Such a program would be quite a change for YouTube. We think this is due to pressure from investors who see that the cost of supplying video to users all over the world still isn’t bringing in its equivalent in advertising revenue.

YouTube became successful because it allowed people to share their own personal “LOL” with the world “" for free! Considering that there are plenty of other and more well established places to stream movies, most offering better quality or lower prices at this point, and YouTube is a late entrant into the game.