Everyone knows the basics of a tower defense game.‚  A team of bad guys attempt to invade your base, and you, the savior of the people, must stop at nothing to keep them out. Intuitiveness, approachability, and replayability buffed by an addicting nature are the three major tenets of a great tower defense game, and Crystal Defenders for the PlayStation 3 has them all, and then some.

Admittedly, my knowledge and skill for that matter, concerning tower-defense type games begins and ends with “Tower Defense” the Flash game for PC, where I have logged away what feels like hundreds of hours of my life. So I came into “Defenders” with an invigorated excitement for the genre.

The download-only title, built by Square Enix, and available for $10 on both Xbox 360 and PS3, felt eerily familiar, given the “never-forget” style of gameplay the genre so ingrains in the minds of its followers.

In “Crystal Defenders” the goal is simple; prevent the baddies from trouncing through your camp and never let them escape unharmed. You want to kill every last one.

The game contains a total of 12 environments spanning from the beginner’s field, to the expert’s ice-frozen hell-hole. Specifically speaking, level W1 teaches you the basics; enemy types, currency management, and classes, while W2 introduces Power Crystals (placed near troops to up their skill) and finally the arduous W3, where heinously difficult bosses and environments await. 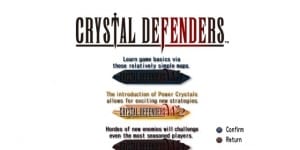 Your first task in every instance is to survey the battlefield and strategically determine where to place your troops based on your idea of perceived success. The beginning levels offer simple, welcoming environments perfectly suited to learn the ropes, but as you progress, maps with multiple entrances and obstructions become a finicky task.

Next you’ll select your fighters. Square Enix did a damn fine job migrating characters from “Final Fantasy: Tactics” to “Defenders” and, as an MMO fan myself, am pleased to learn every class is covered here. You’ve got your fighters, ranged attackers, magik users, and two all-powerful and costly summoning agents. ‚ An interesting character, the “Thief” is a sneaky little bastard. He doesn’t deal damage, but when a creature is slain beside him, you earn 2X the loot. Nice! 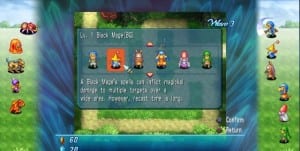 The enemies you square off against range from the mundane to the extreme. One creature, “Ahriman” is a sky-traveling bat-like creature resistant to magik attacks. So when considering attack options for this particular beast you’ll have to rule out the Soldier, who can only attack ground targets, and your magik wielders.

“Crystal Defenders” is, as you probably guessed, all about defending your crystals. You start each game with 20 shiny blue crystals and when that tally wanes to zero..game over. There are two ways to lose Crystals in “Defenders.” One is the result of a successful run-through by a creature, and the second is the result of calling upon one of two mighty summoning agents.‚  These guys are costly, (5 Crystals each) but can save your ass in a jam. 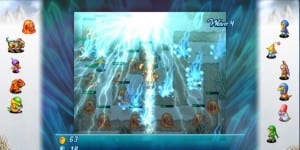 Use these guys sparingly

Additionally, Gil, or gold, is the game’s currency, and can be spent either on leveling up your troops (to grant more health and deal more damage) or to simply acquire more troops. Each creature you kill and successful stage-completion earns you Gil to apply during the next round.

“Crystal Defenders” will test not only your mind, but also your endurance and perseverance, as some of the puzzles, at higher difficulties are damn hard. 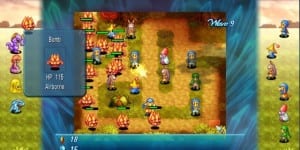 You don’t win per se in “Defenders” rather you prohibit the aggressors from advancing and attempt to advance through as many levels as possible before your Crystals run out.

Visually, “Crystal Defenders” certainly doesn’t push any aesthetic boundaries. In fact, the game mirrors GameBoy games from the 90’s, with its simple 2-D animation and basic character models, “Defenders” actually looks pretty pathetic, especially when considering your playing on a PS3. For that reason, if cutting-edge graphics make or break a gaming experience for you, “Defenders” might upset you, but if you can look past that facet and focus on the core-gameplay, you’ll be just fine.

At $9.99, “Crystal Defenders” is a very solid and affordable tower defense title for the PS3 and Xbox 360. The game is approachable enough for beginners to enjoy, and also deep enough for hardened defense fans to spend time in. The end-game challenges are hair-ripping, controller-throwing, curse-yielding puzzles, but are also alluring in that right. The bottom line is, if you truly enjoy tower defense games, “Defenders” is $10 well spent.

Crystal Defenders is available today on the PlayStation Network for $9.99.