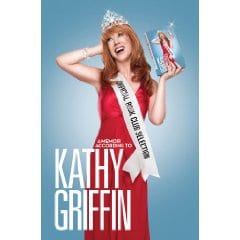 There’s no need to tout Kathy Griffin’s memoir, “Official Book Club Selection” as a tell-all. Really, could anything else be expected from the fiery, decidedly un-PC comedienne?

Anyone who’s seen Griffin’s stand-up routine or Bravo reality show, “My Life on the D-List” knows that her act is essentially a collection of anecdotes about her encounters with and opinions of Hollywood A-listers. Her knack for storytelling comes through in “Official Book Club Selection” a witty, entertaining read about Griffin’s rise to fame and ongoing pursuit of notoriety. She manages to make even the most mundane childhood stories — getting an early start on gossiping by dishing family secrets to the neighbors, for instance — enjoyable rather than tedious.

In her first book, which hits shelves today, Griffin spins memorable (and sometimes less than flattering) yarns about celebs including Jerry Seinfeld, Andy Dick, Steve Martin and her “Suddenly Susan” co-star and maid of honor Brooke Shields, in addition to the expected offhand dismissals of favorite targets like Heidi Montag and the Lohan family. The 20 “discussion questions” included at the end of the book are good for a few chuckles as well (Sample: “When will it be okay to say that the Octomom’s children are in rehab?”)

Unlike with other celebrity memoirs, readers can approach Griffin’s writing with a fair degree of confidence that nothing has been sugarcoated and no one’s ass is being kissed. (Case in point: her mention of NBC head Jeff Zucker in the acknowledgments, “who has done very little for me but thinks he discovered me”)

But what’s most appealing about “Official Book Club Selection” is that Griffin affords herself the same no-holds-barred treatment she employs in her celebrity skewerings, devoting one chapter to a now-deceased brother who had alleged pedophilia tendencies and offering candid details about the collapse of her marriage in another. She frankly describes herself as an “ugly” child, and a binge-eating disorder is mentioned repeatedly. The warts and all approach also carries over to an extensive discussion of her much-discussed plastic surgery and liposuction procedures, complete with explicit post-op pictures.

The sneakily-titled book (hey, her comedy album “For Your Consideration” garnered her a Grammy nomination!), offers insight into Griffin’s fame-whore persona and biting comedy. She discusses first using humor as a way to deal with bullying classmates at the all-girls Catholic elementary school she attended (“If I can keep them laughing, they’ll get off my back” she remembers thinking), and recounts her struggles to make it in the Los Angeles comedy sector at great length, but without a sense of entitlement or self-pity. But anyone who thinks Griffin is one-note needs only to read her moving account of the suicide of her “Suddenly Susan” co-star David Strickland to prove otherwise.

As a writer, Griffin comes off as refreshingly self-aware. She recognizes her own need to be the center of attention from an early stage, whether through starring in the school play or unexpectedly popping up in yearbook pictures for all the school clubs. “That was my big thing, getting my name out there, a credo I still live by today” she writes. “You may not like me or embrace me, but I’ll bet you’ve heard of me.”

Though it’s unlikely to win over any detractors (or be on Oprah’s short list for her next Book Club pick, announced September 18), “Official Book Club Selection” is a must-read for any Kathy Griffin fan.