Electronic Arts and Mythic Entertainment in conjunction with Black Library Publishing today announced “Forged In Chaos,” the third installment in the epic Warhammer Online series which delves into the vicious lore of the universe. 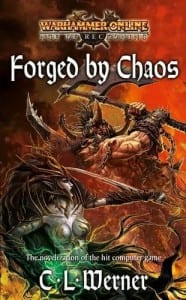 Releasing at all major bookstores this fall, and penned by C.L. Werner, “Forged in Chaos” not only has a bad-ass name, but also‚  “provides an epic and gripping account of Destruction’s incursion into the infinitely massive and decidedly deadly Bastion Stair in search of the legendary Spear of Myrmidia.”

Admittedly, my knowledge of Warhammer Online is nearly nonexistent, but as with any writer, I appreciate a well written tale, which Forged In Chaos seems to be.

Jeff Hickman, Executive Producer at Mythic also enjoys the book when he says: “…Rife with internal conflict, shifting allegiances, and a never-ending lust for murder, we see firsthand how this unholy alliance of Destruction is just as deadly to each other as they are to the armies of Order.”