Over at Industry Gamers, there’s a chart and an article describing the rise in Wii review scores from last year to this year. The average review score of a PS3 and Xbox 360 title is steady relative to 2008, but for Wii, it has jumped from a 60 to a 66. While that may not seem like it’s any good, the PS3 and 360 are sitting at 68 and 67, so the difference is negligible. Of course, a 66 on Wii may not equal a 66 on 360, but regardless, the change in score is important. 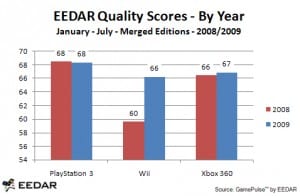 Industry Gamer presents some theories, but doesn’t get into too much detail. One point asks if Wii reviewers are grading on a curve–they dismiss the notion to avoid getting yelled at, but I can see their point. While you want your review scores to come off as objective as possible, it doesn’t always happen–that’s just the nature of a number system picked by a human. It’s something we as reviewers do our best to avoid, to push aside any biases we may have in order to review a product for what it is subjectively, but since it is opinion-based, even when it comes from fact, it’s not an infallible system. I know how hard it is to come up with a score for a game though, so I wouldn’t point any fingers either, just like Industry Gamers avoids doing.

We can take a look through our own catalog of reviews to see just how well the Wii has been doing this year, at least critically. Here’s every game that scored at least an 8.0 (sorry, The Conduit; you just miss out):

*This one gets included, solely because of the claim that the DLC could make this a much better experience, and it did. When you take the whole package into perspective, it’s much better than this score indicates.

Final Fantasy Crystal Chronicles: My Life as a Darklord – 8.2

I think the main difference has been that there is a lot more successful third party support on the Wii–for every disaster like Ready 2 Rumble Revolution, you now have a MadWorld or a Little King’s Story or what have you to counter it, rather than just waiting on Nintendo to deliver the goods in the form of Mario, Metroid, Zelda and the like. There are games we haven’t reviewed this year that have been great on the system as well, like Rune Factory Frontier and the aforementioned Little King’s Story, which is one of the best games on the system (a review is coming eventually, promise–a perfect storm of conflicting events got in the way of that happening for a bit.) The games may still be hard to find in stores due to the shelves of shovelware (I’m looking at you, Gamestop) but they do exist for those willing to find them. WiiWare has also helped, and has had a pretty strong year as well. With Motion Plus now available, and more third-party support on the way, do you think review scores will climb even higher in 2010?

Nintendo has supported the system with lesser-known properties like Punch-Out!!! and Excitetrucks this year, but with new Zelda, Mario, and Metroid on the way, along with potential hits like Red Steel 2 in the works, it’s certainly possible. There’s plenty left to look forward to in 2009 though, with Muramasa: The Demon Blade, Spyborgs and Dead Space: Extraction releasing this month as well as the mass of pre-holiday and holiday releases from both Nintendo and third party developers and publishers like Konami, Capcom, Wayforward, and XSeed around. Chances are good that, this far into the console life cycle, developers know what needs to be done to make a quality Wii title, and they are doing it, and doing it often.