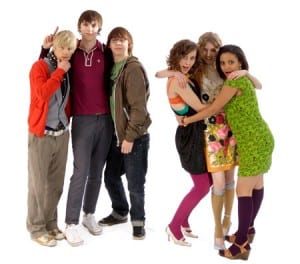 MTV announced this week that it will develop a U.S. version of the British hit television series “Skins.”

The US version will retain one of the British show’s creators, Brian Elsley, as a writer and executive producer. But perhaps more importantly, MTV will maintain the unique writing and casting model that made “Skins” a success across the pond. This means MTV will select a group of unknown teenagers to be both the writers and stars of the show, which will be set in Baltimore.

“We intend to preserve the authenticity of the British version and are excited to collaborate with the original team to develop stories that will speak to American youth,” said Liz Gateley, Senior Vice President, MTV Series Development.

Like most teen dramas, “Skins” is about all the of the good and bad teenagers encounter growing up and looking for love. Since it’s premier in January 2007, it has made a major cultural impact on British teens, who are now sometimes referred to as the “Skins Generation.”

In the UK, “Skins” was the third highest-rated show of the year on the channel E4.‚  It also won a 2009 British Academy of Film and Television Arts Audience Award and Best Drama Series at the 2008 Broadcast Awards — the former of which is voted on by the public.