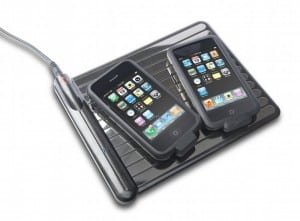 WildCharge Inc. manufactures small electronics charging solutions. The most exciting of these products are their “wire-free” chargers. I just got my hands on one, and I found them to be effective, convenient, and much better than dealing with one of those wall-warts.

The charging system comes in two parts. The first, the WildCharger Pad, plugs into a wall like any other charging base station. The pad is a simple, flat surface that you lay your device on. There are no sliding parts, no grooves to line up, no orientation to match “" you just toss your device onto the pad and it automatically starts charging. I tried placing my iPhone in many different directions and playing around with it, but I was unable to find a orientation separate from being of the pad where the WildCharger failed to charge.

The trick, which the engineers took no effort to hide, is the twelve strips of metal in the pad that generate a potential. The second component to the system is the case you attach to your device. The iPhone case I tested has metal contacts on the back of the case in a “T”-shape. They were spaced out in just the right proportions that at least one of them would connect to a different strip of metal on the pad, completing a circuit, and generating the charge for the device. Because the pad is larger than your devide, you can also cram as many devices on the pad as you want.

So while the WildCharger Pad is technically wireless, it still requires metal contacts to transmit the power. This means that you couldn’t put something over the pad and expect it to charge. Also, should the contacts on the case ever become oxidized, it will become unable to charge. 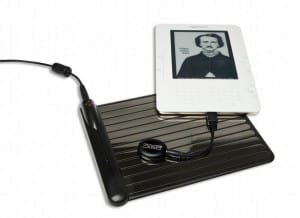 WildCharger's universal adaptor can let you charge just about any device.

Even with these possible limitations, the technology is promising. ‚ The company is currently developing laptop chargers. Looking even further into the future, the company hopes to put all of these devices in cafes, restaurants, and bars, eliminating the need to fight over outlets. We’ll just hope no one spills something on them. That would probably be bad.

While I used the iPhone case, the company sells cases for the iPod Touch and Blackberrys, as well as generic adapter to most phones or other devices. The case is rubber which covers the phone while also preventing scratches and other damage to the phone. The case isn’t too difficult to remove, which is a good thing since in order to charge your iPhone or iPod Touch, the WildCharger has to be plugged into the dock port on the phone, preventing you from syncing with your computer while the skin is on the case. Though many other skins cover or otherwise obscure the port, it’s still is a hassle to have to take it off anytime you want to sync your device.

Overall, I think the WildCharge is a great product, and if the WildCharger pads start to show up at my local Starbucks, we certainly wouldn’t complain. At this point, you just have to ask yourself how much the convenience of not having to charge your device with a wire is worth to you.