MANCHESTER, Conn. — When Sony announced a brand new $299 PS3 console, the smaller, lighter “PS3 Slim” last week at GamesCom we at Blast were giddy with excitement to get our hands on the new hunk of hardware and give her a test run.

Kaz Hirai, President of Sony said the Slims would hit retail beginning sometime in September, which if you’ll notice, is still a week away.

However, calendars and their silly numbers only make me laugh, so…

Amped with unbridled excitement and cash burning a hole in my wallet I trekked to the local Best Buy this morning to see if they had any in stock. After seeing none and receiving a blank “a PS3 what?” statement from a blue shirted electronics worker, I zipped over to the trusty GameStop to do the same.

At this Manchester store my luck was different and I scored one of two available systems. 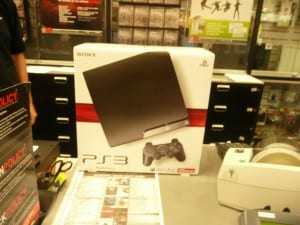 Enjoy this unboxing video hastily posted via what little capability my digital camera has of video recording. Also, sorry for some of the Blair Witch moments.

Note: “PS3 Slim” is actually meaningless. Nowhere on the box does the word “Slim” show up, but to make life simpler we’ll call it that.