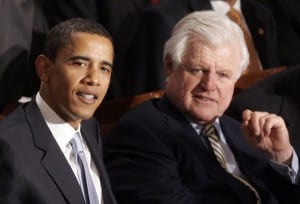 Massachusetts Senator Edward Moore “Ted” Kennedy has lost his battle against brain cancer at his Hyannis Port home at the age of 77, his family announced this morning, just two weeks after the death of his sister Eunice Kennedy Shriver.

Known as the Lion of the Senate, he will be remembered as one of the most effective legislators in United States history, due in large part to his uncanny ability to work with members from both sides of the aisle to push through important legislation, including the Americans with Disabilities Act.

“Edward M. Kennedy “" the husband, father, grandfather, brother and uncle we loved so deeply “" died late Tuesday night at home in Hyannis Port” said the Kennedy family in a statement. “We’ve lost the irreplaceable center of our family and joyous light in our lives, but the inspiration of his faith, optimism, and perseverance will live on in our hearts forever.”

“One of the Commonwealth’s brightest lights went out last night,” Patrick said. “Ted Kennedy was a compassionate, effective, visionary statesman, family man and friend. Diane and I were blessed by his company, support and many kindnesses, and miss him profoundly. We pray for comfort for his beloved wife and partner Vicki and his entire family.”

President Barack Obama, on vacation with his family on Martha’s Vineyard, released a statement early today. Kennedy’s endorsement of Obama during the primary season was considered key in his eventual victory.

“An important chapter in our history has come to an end,” Obama said.