It’s been a while a since audience members have seen Jim Sturgess headline a film. The talented British actor caught the world’s attention a few years back as the character of Jude in the Golden Globe nominated feature, “Across the Universe” a Beatles inspired musical by director Julie Taymor, which showcased his vocal chops in taking on some of the most iconic songs in rock. 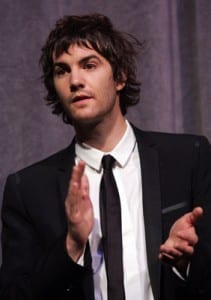 But a lot has happened between the days of singing “All You Need Is Love” to the gritty streets of Belfast where Sturgess returns as the lead in “Fifty Dead Men Walking” a political drama inspired by true events and based on the life of IRA informant Martin McGartland.

The film directed by Kari Skogland takes a look into the conflicts within Northern Ireland during the 1980s, illustrating the lengths the IRA and British Intelligence ventured in seizing control. Meanwhile Sturgess captivates audiences with his intense performance as the conflicted Martin McGartland.

The actor spoke with Blast about his experience making the film as well as insight into what motivated him to pursue the role.

“I was completely pulled into the story,” Sturgess said. “I wasn’t sure whether this guy was going to die or not. Then I found out this is based on a real person, and it made it that more compelling.” The man he portrays, Martin McGartland, continues to be a source of controversy — a fact of which he is well aware. “And the thing about the character, you know, for some he’s a hero, and to others he’s the lowest of the low. I mean, he’s this real person who isn’t out to save the planet or anything,” he said. “He’s not even sure if he’s doing the right thing or not.”

Sturgess said spending time in Belfast helped him prep for the role. “I was really fortunate to spend a lot of time in the city where it takes place, talk to ex-IRA members, and Special Crimes. It helped a lot in developing the role.”

The film’s major catalyst occurs when Martin is caught by the police for selling stolen items, which begs the question whether Sturgess himself ever went through his own youthful rebellion. “Well, I did some naughty things, didn’t pay attention in school sometimes, stuff like that,” he said, “but nothing enough to get recruited for the IRA.” He laughed at the thought of it, and it’s this sort of candid response where you can’t help but see how he can charm an audience.

Sturgess said his motives for taking a role are not necessarily based on big or small budgets. It’s all about good work. “I don’t think it matters how big or small (the budget,) as long as it’s a good script.”

Certainly, he can also add “Dead Men” co-star Ben Kingsley to the list. “At first when I met him, I was nervous — kind of felt like I was shaking in my boots, you know? It was really great to work with him. He’s the best,” Sturgess said.

Sturgess said he doesn’t pay much mind to buzz, reviews and awards gossip. “I can’t really think of it. You work hard, and try to do the best. If it happens, okay, but I don’t really think about it” he said.

But don’t let nonchalance fool you. The busy actor continues to work good and hard despite his current schedule, “It’s chaotic, but it’s a good kind of chaos” he said. Sturgess’ next major project is the horror film, “Heartless” which co-stars Harry Potter alumni Clƒ©mence Poƒ©sy (Fleur Delacour) and Timothy Spall (Peter Pettigrew).