The first batch of downloadable content for Red Faction Guerilla has arrived, and if you were into the full game, then you will be pleased with this. There are not necessarily a lot of new ideas here, but what is available is certainly worth your time and money. Demons of the Badlands puts you into the role of Samanya, the nonplayable character from Red Faction Guerilla who has her roots with the Marauders. This is a prequel, taking place before Red Faction has even formed on Mars, but it does show you how Samanya found her way out of the Marauder camp and into a longstanding fight with her sister, the leader of the Marauders.

The main missions are a good time, and just like with the full game, you need to clear a certain number of side missions or drop the Earth Defense Force’s control of Mariner Valley enough so that the next mission becomes available. You can do this by either completing side missions or blowing everything EDF-owned on Mars to hell using rocket launchers, mines, remote charges, and of course, your trusty sledgehammer. Each time you complete a mission, be it main or side, you unlock new abilities, like carrying extra charges, holding more rockets, etc, so by the end Samanya is a walking force of destructive nature, much like Alex Mason became. 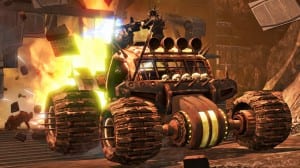 This is not a quick batch of DLC either–if you want to spend time blowing up each and every important EDF target (there’s even an achievement for doing so) and completing every side mission (ditto on that) then you will put a good 4-5 hours into Demons of the Badlands. If you want to beat the Pro times on the transporter missions, it will probably take you a bit longer than that, and there are also 75 power cells hidden throughout the world that need to be collected–considering I picked up just 25 or so during my first playthrough, you could say they are hidden well and will take time to acquire. There are 250 achievement points in all, and since the other DLC packs will focus on multiplayer and wrecking crew, this is your best shot at adding to the single-player Red Faction Guerilla experience. 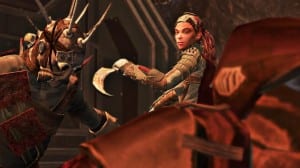 There’s very little to complain about with Demons of the Badlands–even on the normal difficulty, there are loads and loads of EDF for you to take out, and they actively hunt you down just like in the full game. My one issue is that there isn’t much variety in the side missions, as most of them are Demolition ones. I will say though that these will require a lot of thought put into them, as they are set up like puzzles rather than as the kind where you just throw a bunch of explosives down and hit go. 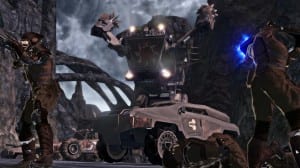 There are a few new vehicles to try out, including a walker with flails on its hands–there’s an accompanying mission to use that in, so you will get to blow up plenty of EDF with this fancy mix of old-school and new-school weaponry. The game does load you up with tons of remote charges and a rocket launcher early on as well, meaning once you get to an area, you can stay there until you’ve blown everything in sight up or get shot down. This cuts down on the backtracking, and since you don’t need to collect scrap, also lets you do a bit more hit-and-run style guerilla warfare. You could complain that this makes things too easy, but you could also just ramp up the difficulty and see how that works for you.

Blast Factor: If you’re a fan of the full game, then you will also like Demons of the Badlands. You’re paying $10 for a condensed Red Faction Guerilla experience that takes place in an all-new area, using a character that was formerly an NPC, and you get 4-5 hours of gameplay, making this almost like a mini-expansion rather than just a new map with a few new vehicles and missions. It’s worth your time and money, so if you’ve still got the itch to blow the EDF away, get downloading.

Demons of the Badlands is available on the Xbox 360 and Playstation 3 for 800 Microsoft Points and $10, respectively.