Sony, at the GamesCom convention in Cologne Germany today announced a brand new model in the PS3 family, the PS3 Slim.

Set to release in the first week of September the new model will sport an attractive $299 price tag, is 33% smaller, 36% lighter, and uses 34% less power than the original PS3.

Still, however, the new piece of hardware does not support backwards compatibility.

The long, arduous road to affordability, at least through my strapped-for-cash-college-kid mentality, is finally over, as $299 (with no tax, thanks New Hampshire!) is within my spending range.

Moreover, the now fat and energy hog 80GBmodel currently riding on retail shelves everywhere has had its price slashed $100 down to $299 effective immediately. I’d wait for the Slim if I were you though. 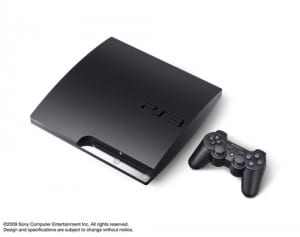