Visceral Games, the dudes and dudettes who brought you Dead Space today at GamesCom in Germany revealed that beginning February 9 2010 and running for all eternity you’ll be able to dance the circles of hell in Dante’s Inferno. 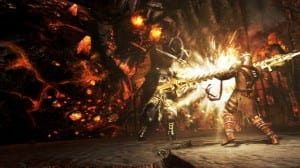 “The Divine Comedy is one of the most influential pieces of literature in the world and we have a great responsibility in re-imagining Dante Alighieri’s vivid descriptions of hell, and the themes of righteousness and redemption he explores” said Jonathan Knight, executive producer of Dante’s Inferno. “Our team is dedicated to delivering a stunning and highly polished interpretation of this classic to a new medium for a new generation everywhere this February.”

In the game you’ll play as Dante and are tasked with trudging through the nine circles of Hell; limbo, lust, gluttony, greed, anger, violence, heresy, fraud and terachery on your way to save the soul of your lass Beatrice at the hands of Lucifer himself.

We know Visceral has the talent, look at Dead Space for proof, but until we get our hands-on, it’s hard to separate PR-spun phrases from the actual nature of the title.