If you’re like me, you miss one of the finest genres ever created, one that has been missing from home consoles for about 15 years. The exploratory sidescroller, a la Super Metroid, has just gone missing the past few console generations, which is a shame given that Super Metroid is one of those inarguable “greatest games of all-time” types. ChAIR believes that the genre deserves a second life, and with their most recent game, Shadow Complex, they may have just breathed life back into it. I spoke to Donald Mustard (creative director) and Geremy Mustard (technical director) about Shadow Complex, its story, and its inspirations.

BLAST: How about you tell our readers a bit about ChAIR?

Donald Mustard: We formed ChAIR a little over four years ago, with the intent to create really awesome games and really cool intellectual properties to create and control to set those games in. Our first game was Undertow for the Xbox 360, and just next week we’re coming out with Shadow Complex, which we’re very excited about.

About a year ago, we were purchased by Epic Games. We are now a subsidiary, part of the Epic family. That is so awesome for us, because Epic came in, and gave us all of the time and resources and expertise that we needed to create a really powerful game. The awesome part about being part of Epic is that we get access to the Unreal Engine 3, which is, in our opinion, the very best game technology that’s ever been created. We love using it, and that’s a huge advantage to being part of the Epic family.

BLAST: Shadow Complex has a deeper story than many sidescrollers and other games in the genre, which makes sense given you have Peter David working on it. Tell us a little about how you get Peter to work on it, and on the story itself.

DM: The story of Shadow Complex takes place in our Empire universe. About two years ago, we released a novel called Empire by Orson Scott Card. The novel is about a second civil war breaking out in the United States in the near future, and the ramifications of what that would entail. The story of Shadow Complex runs parallel to the events of that novel and sets up a lot of the events to the sequel to that novel, Hidden Empire, which will come out this December. 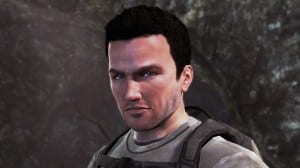 Shadow Complex is reminiscent of some of our favorite games from the past, like Super Metroid and Castlevania: Symphony of the Night, games that are all about exploration and this environment that you’re placed into. One of the challenges that we wanted to take on in Shadow Complex was to layer in more story than we have seen in those games in the past. We thought it would be awesome to partner with something who understood quick, concise dialogue, and we thought “Who better to do that then a comic book writer” They really have to marry their words with a strong visual style, similar to games in many ways.

We don’t see any reason not to set our sights high, so we made a list of our favorite comic book writers of all time, and Peter David was at the very top of that list. We were able to get in contact with his agent, and through that we got his phone number and we called him up. We talked to him about what we were thinking about Shadow Complex, and what the ideas were, and he really loved the idea of it so we were able to somehow convince him to come and partner with us in writing the story and script. We think the end result is just awesome, he did an amazing job of creating a compelling narrative with cool characters, but still allowed for so much of that open-world freedom that we kind of needed in the game.

BLAST: I see a bit of Metroid Fusion in this title as well, since that game had more story and you have the voices coming in over the walkie and such, in a similar way. How did you prepare for that game, as the play style”"even though it does its own things as well”"it mirrors them [Super Metroid & Metroid Fusion]; did you do anything special to prepare for that?

DM: For us, for everyone at the company, Metroid, Super Metroid, Zero Mission, and Metroid Fusion are some of our favorite games of all time. And we just saw this hole in the genre. I’ve been waiting almost 15 years for someone to make a new console version of these exploratory sidescrollers. Imagine if no one made a first-person shooter for 15 years, how weird that would be. Then 15 years later, Call of Duty 10 comes out; after 15 years, how fresh do you think that would feel? We decided that no one is making these games, even though they are so awesome, so when we finished Undertow we decided it was a great opportunity to take a stab at creating this type of game. That’s what we set out to do. So at the very beginning of the development process, we looked at the Metroid games to see what they did right, and what we thought they did wrong, and how to bring them back with a re-design and modernize it with everything we’ve learned in the last 15-20 years about game design about pacing and narrative flow, and then fuse that with the very best game technology that we have. The Unreal Engine, bringing in all the graphics and AI and all the things we can do now in modern games. We’re pretty happy with the result, but it remains to be see–you can answer this question better than we can”"were we able to take the old and create something that was fresh and new for gamers today? 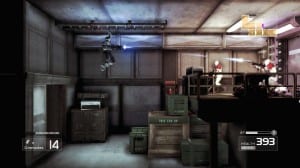 Geremy Mustard: One of our goals along those lines was”"well those types of games are still out on handhelds, like the Game Boy”"but that’s a pretty niche market, for the kinds of people that remember those types of games, and we wanted to really bring it to the next generation and bring it to the new generation that has been weaned on Halo and the modern first-person shooters, and we wanted to make that type of game accessible to those kinds of players as well. Hopefully that will be the case.

BLAST: Do you have any kind of insight or idea as to why this type of game disappeared from consoles for 15 years?

DM: Super Metroid came out in 1994, and then in ’95, the Playstation came out, and then everything was 3D, 3D, 3D. The idea that a sidescroller, no matter what the design was, could be successful, went away. Now, as games have become more mature, and the technology has become more mature, the platforms have matured; look at what Microsoft is doing with Xbox Live Arcade. It creates opportunities for all kinds of games being developed, regardless of the design. There is really an opportunity now for any kind of game to be developed on these next-gen systems regardless of where you set the camera.

BLAST: One thing I noticed while playing is that Shadow Complex looks like it’s set up for speed runs, which is kind of interesting given that speed runs seem to be one of those things where you exploit the design. You even have an achievement for completing a speed run.

DM: We do! One of those things we have fond memories of was the ability to do speed runs in games and sequence break them. While I will always believe in my heart that while I was speed running Metroid and sequence breaking Metroid that no game designer ever intended for that to happen”¦I think they intended for that to happen, and they made the game support it. So we thought, “Of course we have to support that.” Of course we have to allow the technology to even consider that someone out there will think of ways to break things that we never even thought of, and so we wanted to make sure that we could support it and allow them to complete their game however they want to figure it out. So because we decided to support that, it allowed for some really awesome stuff to happen, and as we ran through the testing process of the game we started to see all the cool ways to speed run the game and sequence break the game, and we allowed that to stay in. So yeah, you can absolutely speed run the game really, really fast if you know where everything is and you’ve played it several times and leveled up your character even enough to unlock some of the really cool secrets and abilities we have to assist you in speed running. A lot of that is built in.

GM: Honestly we see that as one of the coolest forms of replayability that we have in our game, and that these types of games have. Even though you’re kind of playing through the same experience, it’s quite different as you try to play in different ways. Obviously you can see from the older games, people continue to play Super Metroid to try to do speed runs and sequence breaking, there are all kinds of videos on YouTube and stuff about that. We know it’s a very valid form of replayability to get value out of the game, so we wanted to support that as well as we could.

DM: Geremy’s right; playing the game in new ways almost creates an entirely new game experience. Some of these people, after they beat the game a few times, will be able to reach the foam earlier in the game, and will be able to beat the game with just their foam and the pistol. That is a completely different gameplay experience than any other way of playing the game, it’s almost like a new game at that point. There’s some really cool stuff for players that are more interested in finding new stuff to discover and interact with in the game in new and unique ways, it can really extend the life of the game.

BLAST: So the game comes out Wednesday, if it’s successful do you see yourself doing anything else like this in the future? Any other style of throwback, or more in the Metroid/Shadow Complex style of game?

DM: The short answer is we would love to. We love the challenge of making this kind of game, and through the creative process we learned so much about how to create these kind of non-linear, exploratory games. If a game like this can take off, not only would we love the opportunity to create more games like this, but what I really hope is that other people would make games like this. The one problem with Shadow Complex is that Geremy and I already know where everything is! We don’t ever get to play it and enjoy a fresh, new Metroidvania style next-gen game. I hope someone else will make it so that I get to play. Uh, not another Shadow Complex though [laughter]. You know what I mean.

At the end of the day, we are beholden to what gamers want. If they want it, we’ll make more.

GM: We have some sweet ideas for a sequel to Shadow Complex, so if your readers want it, tell them to go buy the game. [laughter] [Editor’s Note: Go buy the game.]

Shadow Complex releases Wednesday, August 19 for XBLA at 1200 Microsoft Points. You can read our review here.