Twitter is about to undergo some major changes to how its users retweet. Previously, users had to copy-paste the tweet and add “RT @retweeted_user.” We’ve always felt this implementation was rather clunky, especially considering that the RT parlance counted against your 140 character quota, nevermind how there was actually no offical tracking behind the scenes. You could technically make up retweets, but that that always struck us as just slightly less pathetic than live-tweeting your lunch.

Now, a new retweet API ‚ will allow them to happen via a click of the button. Users will no longer get to add a comment to the tweet. Instead, the tweet will show up in the retweeter’s timeline as a tweet from the original tweeter. In other words, if you were to look a Twitter user’s stream of tweets they’ve made, retweets will show up looking like they were made by the tweet’s author. Beneath each tweet will be a small bit of text stating that the tweet was retweeted. If you still don’t get what we mean, just take a look at the screenshots.

The API will be slowly rolled out to developers, and then to a small testing population before the switch will be finally thrown for all of Twitter at the same time over the coming weeks. 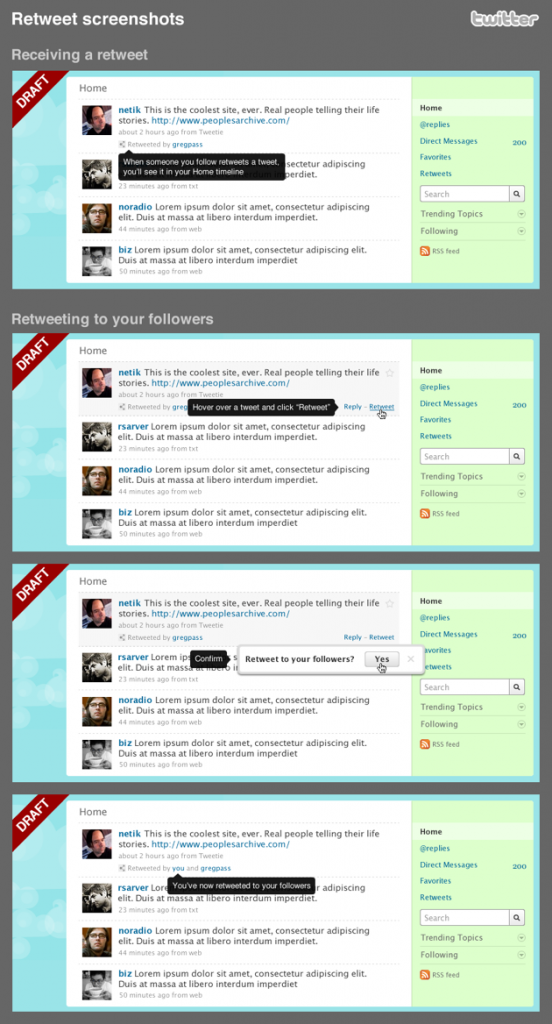