We like Battlefield 1943. A lot. We may even like like it, with little hearts and notes all over the back of our reporter’s notebooks. The game has been out over a month, and we both reviewed it and made it our Editor’s Choice pick for downloadable titles from July, but that doesn’t mean we’re done talking to you about it. Today we have an interview with producer Gordon Van Dyke of Digital Illusions CE (DICE), the developer of Battlefield 1943, on the success of the title, the inspirations behind it, and the future of the franchise.

BLAST: Where did the idea for Battlefield 1943 originate from?

Gordon Van Dyke: The original idea came from the Frostbite engine reaching this mature state, where we could now do what they wanted to do back for Battlefield 1942. They wanted all of these bells and whistles that we have now, like destruction, as the biggest example. We also kind of wanted to experiment; World War II is a really good era”"I hate to say that without context”"but it’s a really good era for gameplay. It really works well with the planes, the dogfighting, the tanks, the projectiles”"you can kind of put an arc on them to do some clever things, like getting it over the ridge of a hill. The soldiers and weapons too, you know what’s there, you know what’s available. It kind of just worked for a very small project, with a small team, and it worked for creating something unique that wasn’t risky process wise or design wise.

GVD: The main goal was to have an accessible game that we could deliver in a unique way, and that was when we decided to go digitally, over Xbox Live Arcade and the Playstation Network, and then on PC with things like Steam and Direct 2 Drive. We wanted it to be a game that was easy to jump into, kind of quick, and that kind of removes the idea of a disc. That was the main goal, to create an accessible Battlefield on top of that. Accessibility was our mantra. 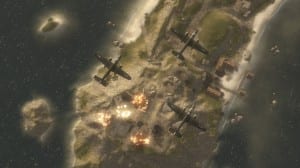 BLAST: The race to 43 million kills was pretty ingenious; it was a good way to reward gamers for playing. Is there more of this thing coming, either with 1943 or with future Battlefield titles?

GVD: It really came out of an accident. We have this designer, and he and I love to fly the planes. Coral Sea came out in an update for Battlefield 1942, so we kind of wanted to do that again. We really wanted to do that map. But it was outside of our project’s scope, it was outside of our resources, so he just went and made it. By himself. So he was just like, “Hey we should try this out, I made it already, what’s the big deal?” So we got in there, and thought it was so much fun, but realized it wasn’t going to work for everyone. It was a constant, “Should we even release this?”, because it’s not going to be something that everyone wants to play, then it became, “How should we release this?” Do we charge for it? Someone always wants to monetize”"it is a business”"but I’m a big advocate for trying to make sure we give back to the consumer, give back to our fans, ‚ give back to the people who really love the game.

We started playing around with ideas on how to deliver this after we got it approved, and we knew we didn’t want to charge for it, and we wanted it in-game, not as DLC. One of our first ideas was to give it to the top 70,000 pilots first, on a leader board with pilot rankings. Then we sat down with PR and marketing, and marketing came added to the idea by saying, “Well, what if we do something to unlock it for everyone?” Everyone’s first thought then was total kills. We can track total kills, so we can do that. It kind of came towards the end, so we really scrambled to get it in the system so we could see who got the 43rd million kill. We got it working, we just needed to do some parsing with the data. Lots of things came together at the last second, and it came out of randomness, but the goal was the community, and I think that being our primary objective, always in this game and going forward with future Battlefield games, it just came out of that. 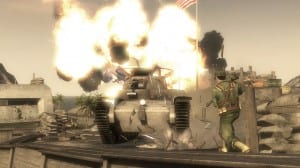 BLAST: I had a lot of fun participating, even if I only had so many kills during it.

GVD: When we first announced it, we saw people posting this on forums and on Twitter, that even if they didn’t get many kills, at least their deaths would count for something. That’s a really good point, I didn’t even think about that! But that was the main goal, because everyone can participate. Even if you’re not the most elite player, your kills count for something and even your deaths count for something. It’s kind of win-win. Some of it was kind of accidental, but a lot of it had to do with the objective of the community.

BLAST: Is the PC version of 1943 going to have any differences from the console versions?

GVD: We’re still working on that, but some things will definitely be different, since it’s not a console ripped port or anything. A lot of that sometimes goes visually. If someone looks at a game, even if there’s a lot of difference, if it has the same menus on console and PC, then they may think that it is a port, so there’s a lot of little things you need to tweak and consider. It is a lot different in the guts, but some changes can visually be updated. We’re looking at the desires of a PC gamer too, as it is different. We’re looking at some of the things we had for 2142 and looking at what we can improve, like inviting your friends, things of that nature.

BLAST: Since 1943 is such a success-I saw earlier that it set sales records for both XBLA and PSN”"does this mean that there may be more Battlefield 1943, like another standalone, or some kind of addition, like an African campaign?

GVD: It’s definitely a possibility, I don’t think we’re closing our doors off to any ideas, but we’re coming down off of this, and right now our focus is that we iron out any issues, like we did with the servers. Every time we added a block of servers, it filled up immediately. I was up for 43 hours after launch, talking to the team in the States as well as my team in Sweden, so I just had no margin for sleep for a few days.

That was the most gut-wrenching thing, I know people were really frustrated, and from their perspective they don’t really know what’s going on in the background. It was gut-wrenching for us too, for the team, for myself, because we want people to play. That’s the main thing when you’re a producer, a designer, a developer, making games, you want people to play games, and you want them to enjoy it. As much as those people were frustrated, we were just as frustrated too behind the scenes.

Thanks to Gordon for speaking with us. Battlefield 1943 is available on Xbox Live Arcade and the Playstation Network for 1200 Microsoft Points or $15, and a PC version is forthcoming.