November 18, 2008 was a great day for gamers and zombie fans alike.

It was the day that Valve’s immensely popular Left 4 Dead title was officially released.

Since that fateful autumn day, both PC and Xbox 360 owners were finally able to truly know what it took to survive the zombie apocalypse.‚  With shotguns and health packs in hand, even the most average Joe (such as myself) were able to star in their own undead cinematic adventure while harming thousands of zombies in the process, leaving many wanting more.

Valve has recognized the zombie bloodlust they have nurtured and have started development on the sequel for Left 4 Dead, called Left 4 Dead 2.

I was lucky enough to get my hands on Valve’s next apocalyptic first-person shooter at San Diego Comic-Con 2009.‚  Though the game is still in development, the creators of Half-Life and the Source Engine did not disappoint with what they had to offer.

Taking place in what seems to be various parts of the southern region of the United States, Left 4 Dead 2 focuses on four new playable characters as they move from safe house to safe house, trying to survive until rescue arrives.‚  Each character has‚  their own back story and contributes some subtle Cajun twang, giving Left 4 Dead 2 an authentic southern feel throughout the game.

The first thing I noticed when getting my hands on Left 4 Dead 2 was how visually stunning it was compared to the initial title.‚  I believe Marc Normandin, my boss and temporary Comic-Con roommate, said it best by gasping, “This looks 100x better.”‚  The longer I played the game, the more I realized that I would not have to stare at dark, grainy NPC models and environments any longer.‚  It was truly a sight to see. 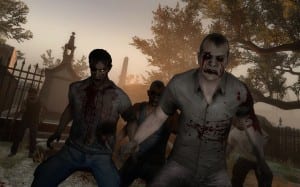 Helping with the previously too-dark-to-see nature of the original Left 4 Dead had an easy solution: making some of the movies take place during the day time.‚  In both of the abbreviated stories I played, my team fought through hordes of undead Southerners in almost broad daylight, evoking memories of certain scenes from 28 Days Later.‚  The motions of the zombies were “completely redone” according to Valve reps, allowing seamless transitions from resting to attacking states.‚  The developers also made the zombies’ detachable limbs more realistic and thoroughly more enjoyable.

Beyond the impressive visual qualities, Left 4 Dead 2 also had plenty of new content to enjoy.‚  Valve did every zombie fan a service by adding various melee weapons to the game.‚  Items such as chainsaws, cricket bats, axes and even frying pans have been added to the mix.‚  Though I didn’t have the pleasure of using the chainsaw nor the cricket bat, I can vouch for the high level of satisfaction that using the axe and frying pan can bring to the game’s experience.‚  Melee weapons can be used in two ways; a player can either use a normal attack or a power attack.‚  Normal attacks or quicker, but take multiple hits to kill enemies while power attacks are slower, but offer a faster and more gruesome takedown of the undead.‚  Melee weapons are carried similarly to the gas tanks in the original title; players can hold the weapon without having to drop their main gun, but will have to drop the frying pan/axe if they would like to access any other item in their inventory. 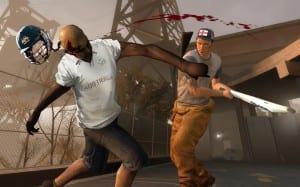 The folks at Valve were also kind enough to add some guns as well.‚  I had a chance to take a sneak peak at the new AK47 and grenade launcher weapons in the game and I was very impressed.‚  The AK47, though not noticeably different to the M-4 in the way it fired, added some diversity to the upgrade guns received when players progressed to the later parts of the stories.‚  The grenade launcher, or “friendly-fire hell” as a Valve rep described it, is a completely new weapon added to the game.‚  Shooting high-powered explosives, the grenade launcher can take out numerous amounts of zombie foes and, as I unfortunately learned, your teammates as well.

Those new weapons will be very helpful when taking out the added “special infected” enemies unique to Left 4 Dead 2.‚  The two new infected I battled were called the Charger and the Spitter.‚  The Charger looked like a mix between a Boomer and a Tank, attacking the survivors with power, speed and a terribly destructive arm.‚  Chargers focus on one character, stampede towards them and smashes them into the ground.‚  Though the Charger is virtually unstoppable when it is running towards you, teammates will be galad to know that it is fairly weak and can be eliminated quickly.‚  Spitters had the opposite approach when compared to the Charger.‚  Instead of running towards enemies, Spitters (shown below) shoot projectile similar-to-napalm saliva at their targets.‚  The substance covers the ground and does damage to whoever remains standing in it. 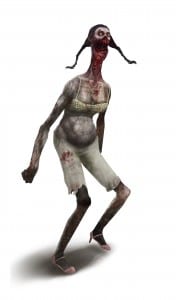 There are also unique-to-movie infected within the game.‚  In one of the movies, players will fight off zombies that are dressed in SWAT gear.‚  Though these undead officers look like your ordinary horde members, they are actually very difficult to kill as they are unaffected when the front of their bodies hit with bullets.‚  The quickest way to take them down is a melee attack, making the nearest frying pan your new best friend.

Valve also answered my prayer when it came to final showdowns.‚  In the first Left 4 Dead title, every movie ended with a final showdown that took place in a small building or shack.‚  Players would essentially have to hold the fort until help arrived every time they wanted to beat the game.‚  However, it seems that Valve has developed a new diverse collection of endings for their new game’s stories.‚  In one of the demos I played, the final showdown actually took place on a bridge.‚  My team and I had to run across the bridge, killing dashing zombies as they funneled through abandoned traffic.‚  Once you cross the bridge and survive certain doom, players board a helicopter and finish the movie.‚  This is a perfect example of how changing even the smallest details can satisfy the most hard-to-please gaming critic. 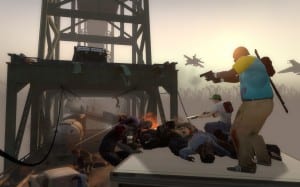 The Artificial Intelligence (AKA “The Director”) in Left 4 Dead seemed to be over hyped prior to its release in 2008 and, to a certain extent, I feel that there was legitimate disappointment in how it played.‚  Left 4 Dead 2 hopes to change my mind with its revamped AI 2.0.‚  Though I don’t have the specifics on the modifications in 2.0, I can say that Left 4 Dead 2 seemed more difficult than its predecessor when it came to spawning health items and pacing.‚  At worst, Left 4 Dead 2 should be a more exciting and challenging experience if the alterations to The Director are maintained.

A main concern for many fans the first Left 4 Dead title was that Left 4 Dead 2 would end up being what the original “should’ve been”.‚  While it would have been nice to see the enhanced graphical presentation in the earliest game, Left 4 Dead 2 seems to have plenty of features to be something more than a slight upgrade to the original.‚  As a fan of the original and optimist for the sequel, I am looking forward to picking up my copy of Left 4 Dead 2 when it drops in November 2009.

Valve’s Left 4 Dead 2 will be released in November 2009 exclusively for Xbox 360 and Microsoft Windows.