The latest fighting game from the brilliant minds that brought us the Guilty Gear series is, in every way, a chip off the old block. BlazBlue: Calamity Trigger might seem like more of the same old-school 2D fighting that arcade hounds have been playing since the early 90’s, but Aksys Game certainly hasn’t rested on their proverbial laurels. Sporting a mix of the very familiar with plenty of new tricks, this is easily one of the best fighters on the market.

Where BlazBlue excels, much like Guilty Gear XX before it, is diversity. There are only 12 characters, which might seem small compared to Street Fighter IV or the newest King of Fighters, but unlike most fighters, this cast covers the gamut of styles with no character copying another. Mastering one or two shouldn’t be a problem for most players, but all 12 will require countless hours of playtime.

As expected, all the characters are of decidedly Japanese design”"weird, anime-styled, with the occasional effeminate male thrown in. Combatants range from an uber-sexy, pole-staff-wielding lady doctor, a gun-toting military girl, a boastful ninja, and a huge tank of a man, to a slender samurai, giant-sword-wielding vigilante, a monstrous creation made of insects, a boy and his creepy mannequin, and even a vampire girl. Each character is completely different from the others and go far beyond normal fighting game stereotypes. 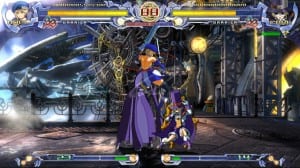 Some characters work with special moves that are essentially traps, where timing and strategy are key. Others are familiar brawlers that are easy to jump right into. All have specific super moves called drive attacks that further differentiate them from each other, and the result is one of the most entertainingly eclectic band of fighters ever.

Beyond the great cast, the game modes offer an incredibly in-depth and satisfying amount of play value. For single players, the main modes are the arcade and story modes. Both modes actually carry some semblance of a story line, though following the overarching and individual character threads will prove challenging for anyone. The polite thing to say about the writing in BlazBlue is that something was lost in the translation from Japan to the US. More realistically, the plot is just a muddled mess. 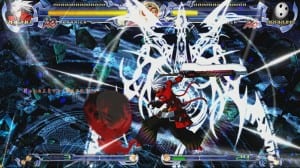 That’s not to say that none of the storytelling works. Some of the plot lines are interesting and reasonably easy to follow, though it would have been nice had Arksys put more emphasis on all the writing in the game. On the plus side, the whole game is structured for replayability. To unlock all the extra moves and character variations, you’ll need to play through both modes multiple times with each character. Even getting the complete story for each character will require multiple passes through their story mode. It’s a great system that continually rewards the players for just playing.

Of course, fighting games aren’t usually about playing with yourself, and BlazBlue delivers a solid multiplayer component as well. Like most multiplayer games, you can compete against the internet in ranked and unranked matches, congregate with like-minded players in six-player lobbies, and even watch matches being played. As you fight, you’ll earn experience points (called rebel points) that accumulate to increase your overall level. This lets you see how experienced opponents are and select matches with other players your level. 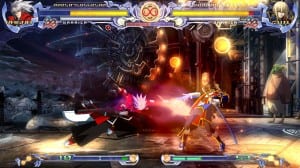 Rounding out the game modes is a training mode for practicing and the score attack mode that tasks players with surviving an onslaught of AI opponents purely for high score purposes. Beyond game modes and characters, the actual gameplay of BlazBlue is a great mix of old and new. Hardcore players will welcome the inclusion of new moves like counter assaults, instant blocks, barrier bursts and blocks, rapid cancels and other intricate maneuvers. Newbies, on the other hand, and more casual gamers will appreciate the easy playability of basic moves and the option to use the right analog stick to effortlessly perform special moves.

Finally, the presentation of the game is topnotch. The 2D, anime style of the characters is gorgeous and colorful, if not quite as sharp as the recent Super Street Fighter HD remix, and the 3D rendered backdrops are amazing active and attractive. The audio work is very good as well, with zippy, dramatic music and great fighting sound effects.

Blast Factor: There’s very little to find fault with in BlazBlue: Calamity Trigger. Sure, the story is nearly incomprehensible, but beyond that this is simply a great fighting game. There’s tons of replayability, amazingly diverse characters, smooth and refined controls, and gorgeous graphics. If you like fighting games at all, BlazBlue is a must buy.

BlazBlue: Calamity Trigger is available for the Xbox 360 and Playstation 3, and retails for $59.99