Guitar Hero Smash Hits, from Activision, Red Octane, Neversoft and all our old GH friends is like any “best of” collection, and offers exactly what you’re expecting, no more no less. If you want a strong variety of solo rhythm game tracks, you would buy a solitary Guitar Hero game, and if you wanted a good, well balanced group rhythm game, you would buy Rock Band because those games are designed with those purposes expressly in mind. You buy Smash Hits for the reason you would buy anything with the word “Hits” in the title: you know what’s on the game already, you like it, and you want it all in one place.

There is a slight contradiction in the idea of a full band game filled solely with songs that were initially chosen for their prominent guitar parts, and because of the need to balance the fun across four controller parts instead of one, the songs that are on the game aren’t necessarily the most fun from Guitar Hero, but are all more or less the most fun for the most people. I was disappointed by the absence of songs like “My Name is Jonas” and “Cliffs of Dover” (both from Guitar Hero III), which have fun parts specifically for the guitar, but would understandably be less fun on the full-band set up. I was particularly disappointed that “Sweet Child O’ Mine” was not on the Smash Hits play list, but to be fair I wouldn’t want to be in a room with somebody trying to sing like Axl Rose. The songs that did make it on to Smash Hits are some of the more well-known from the Guitar Hero repertoire, as well as some of the more challenging (expert-level “Through the Fire and the Flames” is still mind-blowingly impossible, even with the addition of the new neck-slider feature), and most of the songs are pretty well balanced across all four instruments (a notable exception is “YYZ” which doesn’t have a vocal part, but is hella fun on every other count). Unfortunately, there is no downloadable content for Smash Hits to fill in any notable gaps that you might find in the set list, so read the back of the box before you pick it up so you make sure you know what you’re getting. 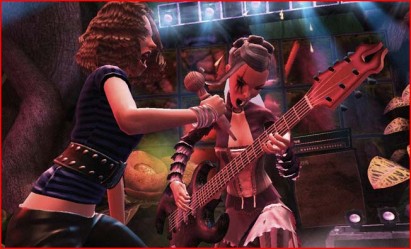 The game’s mechanics, graphics, and features are very much like a no-frills Guitar Hero World Tour, with comparable character customization, band creation and music studio features. Though the game’s tracks are all master recordings, there are no “celebrity appearances” or boss guitar battles as there have been in past iterations of the franchise (sadly, no Slash, but thankfully no Ted Nugent). Again, this is not the full Guitar Hero experience, just the major bullet points condensed into a single game. If you really want the CG chick from Paramore to play onstage with your Avatar, the other games are what you’re looking for. This game is for the Guitar Hero junkie (that is to say: me) who has “Killer Queen” and “Fire and the Flames” on his iPod and‚  really would like to try the vocal part for once.

With this in mind, Smash Hits does do us all a favor by dispensing with the trouble of unlocking all the songs in career mode before being able to play them casually in quickplay. All the songs are available in quickplay from the get-go, because Activision realizes if you buy this game, you just want to play with your rhythm game addict buddies and want to skip over the easy setting and pop songs and crank some Skynyrd on expert without all the hassle of having to think up a band name and play boring songs for an hour to get there. There is a career mode, but even that is streamlined; more complex set lists are unlocked according to a cumulative score from all available songs rather than just the last setlist you played. This means you can unlock a wider variety of songs through good performance on easier songs, and not just adequate performance on the hardest available setlist.

The gameplay itself the tried and true Guitar Hero model with no real differences. The songs have been updated with some of the more complex note patterns that appeared in World Tour, so there are some slight differences between these songs and their originals on the older Guitar Hero releases. The addition of a few neck-slider bars isn’t enough to make the experience of playing the same songs on a new game completely fresh and revolutionary, but it does keep things from getting boring, and the differences between songs are substantial enough that it shows that Activision didn’t just re-package some old games and try to sucker you in to buying them. 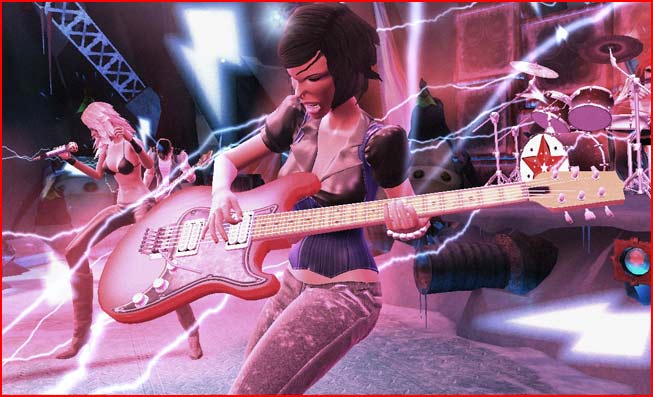 Perhaps the only new addition to the actual gameplay screen is a meter that tells you how many out of five stars you have earned so far in the course of gameplay, and how far you are to earning the next one. If this sounds familiar, it’s because Rock Band has had that feature from the beginning, though I don’t mind it when Guitar Hero tries to be more like Rock Band. There are some of the old Guitar Hero-related irritations like distracting designs on the note highway, or flashes of lightning when you gain star power, but these aren’t any better or worse than they were in World Tour, and have been greatly reduced in scale from earlier versions of the game.

Blast Factor: If you haven’t already decided whether or not you really want Guitar Hero: Smash Hits, you probably don’t. At a full $50 price tag, it costs probably about as much as a used collection of Guitar Hero I, II, and III, or a brand new Rock Band II or World Tour, all of which would offer a greater variety of songs and downloadable content, and would be better especially for newcomers to the rhythm genre. However, if you like what you see and have been dying to play some of these old songs with your rhythm game buddies, then by all means, grab it up, plug it in, and rock out.