SAN DIEGO — With the newest edition of Madden NFL coming out in just a few weeks, EA had it at the ready for media at San Diego Comic-Con. We were able to check out the game and play a bit with EA Tiburon’s Art Director Tim Spangler, and we took the opportunity to ask him a few questions about the title’s major visual overhaul.

BLAST: In the past, Madden on Wii was visually behind its hi-def console cousins. What prompted the complete overhaul of the look and style?

Tim Spangler: One thing we wanted to do with the Madden product coming back to [EA] Tiburon was to create a unique visual style that would stand out among all of the other Madden’s out there. As soon as you pop in our disc, you’ll notice a lot of changes from a visual standpoint. You’ve got all new character designs, all new stadiums, all new fields, all new interface presentation, and all of it specifically designed to make the most of the Wii hardware.

BLAST: It looks kind of arcade-y to me, but in a good way. You have this realistic game attached to an arcade look. What inspired you to go down that road?

TS: In terms of visuals, there was a Coke commercial that came out around the time of the Olympics, and it had LeBron James and Yao Ming on it. They went into this festival thing that was all about the matchups, and basketball, and the Olympics, and it was this comic book looking, stylized characters, and we looked at that, and at the same time”¦it’s not right when Team Fortress did it, but Team Fortress was getting huge around that time. We looked at that, and our goals were to differentiate. Team Fortress had very similar challenges, being a stylized first-person shooter in a genre that’s known for a lot of realistic gameplay. So, we look at those two as our two main inspiration points. We also looked at toys, graphic novels, films, stuff like that.

BLAST: With Grand Slam Tennis, EA showed a willingness to go with style over realism. Now that a flagship title like Madden has been altered in the same way, can we expect this to be the norm on Wii in sports games?

TS: I can’t really speak for EA Sports as a label, but I know in general we’re trying to make a real strong presence on the Wii console. I would say that if titles like Grand Slam Tennis and Madden do well, and people enjoy them, then we will make more products like them.

BLAST: Let’s hear some details about specific changes, like the player’s bodies. What are they like now?

TS: In years past, you couldn’t really tell the difference between Brian Urlacher and Peyton Manning from the silhouettes, they looked the same. In our game, we tried to say, across the board, what types of body types would you need to excel at certain positions. ‚ So what we did is we studied that frame at pre-play, and then we said, “Okay, we need wide receivers and defensive backs.” With those guys, we wanted a tall, thin, think of a Randy Moss. He’s the prototype kind of guy that plays the position. Then inject some personality into them, like big hands, colorful gloves, big feet. Then you’ve got your quarterback, he’s kind of your broad shouldered, classic pocket-passer, the leader of the team. You’ve got your linebacker, he’s the muscular guy that will knock your block off. You can tell as soon as you see him that he wants to knock your head off. You’ve got your linemen, they look like a hulking mass. They are your blockers, and they are guys you don’t want to get hit by either. And also, with the running backs, we wanted to have a guy you could look at and say, “Hey his legs are kind of big.” Someone like LaDainian Tomlinson, Michael Turner type guys. They are still kind of big, but at the same time they are fast and elusive and low to the ground. So we took that philosophy, and tried to emphasize that in the art with the curves and an overall design that would emphasize those characteristics. 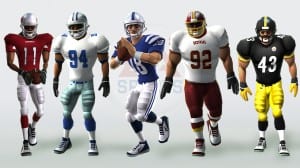 From there, we built our environments around those characters. So we can inject that same personality into the stadium. You can see the Broncos stadium here, they took that same horse and then stylized it so it felt like a natural extension of the overall look.

BLAST: Tell me a bit more about the stadiums.

TS: All of the stadiums were built from the ground up. Every stadium has some type of design element”¦the Broncos have the horse that sits up there and the mountains that surround it. So we took those, and stylized the mountains, stylized the horse. The Bucs have that pirate ship, we took that, injected a bit of personality into that, increased the scale so it dominates that end of the field, did a little play on the palm trees, stuff like that. So we really tried to find those points where the architects had design elements, bring those elements into our world and make them a natural extension of what we’re doing with the players. 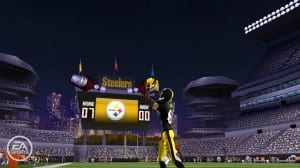 BLAST: The stadiums look huge, they just have this big open space and it looks like there are 200,000 people sitting in the stands. Let’s talk about the menus a bit. That’s the team select screen”¦ do all of the menus and interfaces look different like that now?

TS: Yup. So for all our new modes for this year, we’ve gone with a big, bold, polished look that’s pointer-friendly, very colorful, and easy to interact with. We took that approach when designing the interface for this game.

BLAST: With a revamping of the visual style, it’s clear the hope is to attract more people to the Wii version of the game. What do you think will resonate with gamers new to the series, as well as veterans?

TS: For new people, we tried to make it easy to pick up and play. There’s not a huge, steep learning curve here, but at the same time there’s enough depth where we have our different play modes and different levels of difficulty that veterans can enjoy it too. One thing we did for passing, where in years past it was a lot of complicated gestures that you would have to memorize, we tried to simplify that down. With point-and-pass this year, you press A to hike the ball, point at a receiver to lock onto him, and tap A to lob it or press it and hold real fast for a bullet pass right to him. It’s pretty easy to pick up and play. Also, for the new people on the franchise, we’ve got a co-op mode called Huddle Up. There, that’s like a father/son game. They don’t need to know much about football, they can pick up and play without worrying about complexity. Their kid can jump in and knock down pursuers with the IR. It’s the same thing on defense, you can knock down defenders to take them off of their route, knock blockers out of the way.

Also in new game modes we have Road to the Superbowl. It’s similar to a season, it’s all about getting to the Superbowl, but you can customize how you want to play. You can play that standard 11 on 11, or you can play 5 on 5. You can play half a season, a whole season, or start right in the playoffs. We give you those opportunities as well. We also have Showdown mode, to see who is King of the Couch, see who is the best player in the room. And there we have game changers, which are different ways to play the game: fumbleitis, always turbo, it’s alive, different ways to customize the game for how you want to play.

BLAST: So you have got an arcade product with realistic properties we’re used to from Madden in the same package. That gives people with access to more than one platform reason to pick up both or just the Wii one.

Thanks to Tim Spangler for answering our questions. We will have a preview of Madden NFL Wii for you in the near future. Look for our review of the title around launch as well.