We told you how to become involved with “9” at Comic-Con, and now we have ways for all of you who missed Comic-Con to win some schwag from the Talisman Challenge sweepstakes.

Those of you who have been following the Scientist’s journal on www.facebook.com/9scientist know a few weeks back, the Scientist was forcibly removed from his laboratory and interrogated. Upon returning to his lab, the Scientist realized that the Chancellor’s men had seized a collection of designs vital to his research. One of these designs holds the key to his next phase of development.

The designs have been shredded and torn into nine pieces, scattered in nine secret locations. When all nine pieces are put together, they reveal a secret alchemical code. Only the typewriter on www.9experiment.com can help decode the hidden message from the designs. 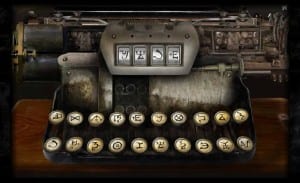 Those who find all nine hidden pieces and use the typewriter to decipher the code will be treated to a piece of “9”‚" movie art, and can enter for a chance to win a pair of the Limited Edition “9”‚" Shoes from Pony, as well as other great “9”‚" movie prizes.

This link from the “9” Scientist Facebook page also provides more detail about where the nine clues are hidden around the web.

Stick with Blast over the next few days for interviews with Tim Burton, Shane Acker and Elijah Wood about “9,” plus other Comic-Con interviews.