Electronic Arts, one of the largest publishers in the industry today announced that they’ve reached out and grabbed Russian MMA juggernaut Fedor Emelianenko for their impending fighter EA SPORTS MMA.

Emelianenko is the latest to lend his digital likeness to the 2010 slated game joining Gegard Mousasi and Renato Sobral, with others, plenty of others, revealed later, according to EA. 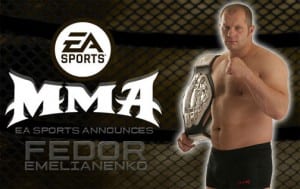 But oh wait. We’ve got some drama to throw your way. Dana White, president of the UFC, recently stated that anyone signing with EA Sports (no matter said person’s ability to smash multiple faces) will not be welcome in the UFC. And if the LA Times is to be believed, Emelianenko is this close to inking a deal with the UFC. ruh roh.