SAN DIEGO “" Though shooting has been wrapped for over a year, “Legion” made its first public appearance Friday at Comic-Con, showing a teaser trailer and bringing the cast and director out in full force to discuss the film. Adrianne Palicki, who plays a Virgin Mary-type character in the film, said it was the first time she saw the trailer. 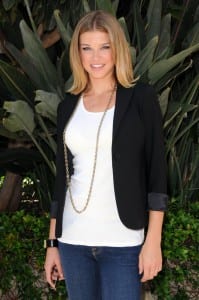 Blast wasn’t lucky enough to get a look at the trailer, but coming from first-time director Scott Stewart who has a background in visual effects, it is sure to look amazing.

“Well he didn’t speak throughout filming the movie” Palicki joked about Stewart’s background in visual effects, “he just kind of drew out what he wanted, and just pointed to it. No, he was really amazing as a director because he was very collaborative. It’s hard to find actor directors; people who are really good at communicating, and also, if we had issues, he was really great at discussing and finding happy mediums. It was really fun. You have to trust, especially in a movie like this, where you have to give birth and, you know, angels are coming after you, it’s nice to have somebody to trust in the high chair.”

Palicki described “Legion” as “Terminator” meets “Constantine;” a coming together of action and horror with a hint of religion and a dash of comic book flare.

“It’s a bit of a genre film, but it’s not a slasher movie” she said of “Legion.” “There are some very shocking gory moments but it’s not, you know, gratuitous. It’s hard, like there’s such a fine line between a thriller and a horror. I lean more towards the thriller element of it.”

Palicki plays a not-so-virginal woman who is eight months pregnant with a Jesus-like messiah child. When asked who the father of the child was, she paused for a moment and hesitantly answered, “God?” before adding, “Who didn’t I have sex with in the movie?”

“The character, she is kind of loose, so you don’t really know who the father is, and she’s very shocked that she happens to be pregnant with this baby because, why her?” Palicki said. “She doesn’t even own a car.”

Palicki’s Charlie brings the forces of good and evil against each other as the archangel Michael (Paul Bettany) comes to Earth to protect her, and evil forces are coming to stop the birth of her child. Most of the film occurs in a diner where the other characters (played by Dennis Quaid, Tyrese Gibson and Kate Walsh, among others) must work together to stop the biblical apocalypse from occurring. The ensemble cast plays characters that don’t know each other who Palicki described as a bunch of “misfits.”

As far as the supernatural forces in the film, Palicki said they are pretty standard fare.

“The angels that you see appear as angels look like (Paul Bettany’s Michael)” she said. “But there are the others that kind of come through humans, and that’s different. I just, I can’t say too much about it.”
For a film that deals so heavily with religious elements, Palicki said the religion was more of a backdrop to the film.

“It has religious undertones, but it’s not about religion. That’s kind of just a fun back drop for the movie” she said. “And so, I mean, of course, it’s a little nerve-racking. I’m ultimately playing the Virgin Mary, who is not at all a virgin. But ultimately, it’s fun, and it’s Old Testament-ish. It doesn’t portray God in a really bad light, it almost portrays us in a really bad light. I’m interested to see what people have to say about it, but I’m not overly concerned, because I think they’ll enjoy the movie. If they really watch it, they’ll enjoy the movie.”

The film all takes place during the night of Christmas Eve (“So, huh, weird.”) which sets up the possibility for the sequels Palicki signed on for.

“I signed on for three (films). Obviously it will depend on how well this does, and we’ll take it from there. I have no say. I’m legally bound to it anyways” she said. As for the ending, Palicki said it leaves you asking for more.

“It ends with you going, “Where’s Legion 2?” but in a satisfying way, not like a “Lord of the Rings” kind of way, where it’s like I have to wait five years for the next one” she said.

But don’t expect Charlie to be a helpless damsel in distress. Palicki said she will be getting in on the ass-kicking.

Palicki, who was a regular on the TV show “Friday Night Lights” said the shift from television to film wasn’t so bad.

“It was different, but the way we shoot on “Friday Night Lights” is very film-like. We don’t have the eight day episodes; we have six day episodes. We shoot very quickly” she said. “We have an open dialogue. It’s actually not even like a TV show. But having worked with Scott [Stewart] was really exciting afterwards because he was really able to give and take and make us feel comfortable in that environment; make me feel comfortable in that environment.”

In jumping to film Palicki got to work with a wide range of actors as well.

“[Charles Dutton,] oh my god, he was just so awesome” she gushed about her costar. “Every day I would sit there and I would talk to him and he had a different story. You know, he was in prison “" that’s where he became an actor, and he formed this whole drama group in prison “" I mean, he’s just like the most docile, sweet human being, you know? He was a blast. He’s such a great actor.”

“But you know, Paul Bettany’s a complete asshole and Tyrese (laughs) he’s so bad to look at, so no, everybody was so fun to work with. Mainly my stuff was with Lucas Black and Paul Bettany” she added.

Though this was her first time in a panel for a film at Comic-Con, Palicki is no comics virgin.

“I love [Comic-Con]. I actually came last year just for fun” she said. “My brother writes comics so I got into it at a young age. I think it’s hysterical; it’s so fun. Not hysterical like “ËœHa ha, look at you, weirdo’ but like, it’s exciting to be in the element and walk around and just see everybody.”

Though she says “Legion” is more thriller than horror film, Palicki said she is a huge fan of the horror movie genre. As for her favorite scary movie, she said it was the original “Halloween” hands down.

“I think Michael Meyers is the scariest mother fucker” she said with a laugh. “It’s like, the tortoise and the hare; he just walks. He just knows he’s gonna get you. You can run, it’s fine: you can’t hide.”