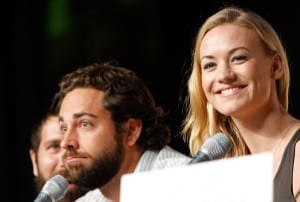 SAN DIEGO “" The epitome of every boy’s fantasy, Yvonne Strahovski plays Sarah Walker, Zachary Levi’s Chuck’s ass-kicking spy handler/love interest on NBC’s “Chuck.” Blast was lucky enough to get to sit down with her at San Diego Comic-Con to talk a bit about Chuck and Sarah’s (finally) consummated chemistry and what could be happening in season three.

It’s going to be a Mr. and Mrs. Smith situation, I think.

On when she found out about Chuck learning kung-fu:

About three days before we actually shot the episode. Yeah, they love to do that. We’re very informed on what’s going on. Actually, I know nothing at all about what’s happening in season three.

I would love to jump from a helicopter, that would be fun. I love doing all that stuff. I get really excited when I have to do a fight scene.

On getting in shape for the show:

I don’t think (Zachary Levi) has been preparing. Mind you, I haven’t either. I’ve got from between now and till the sixth of August to start lifting some weights or something, running around the block.

It’s so great watching it afterwards, seeing it all piece together because you kind of go along for the journey like everyone else is watching it. It’s hard for us because we shoot out of sequence, so everything is kind of in shambles until we see it. I think it was a great moment. There probably will be more of them I think in the third season. I mean, I hope. It’s good to kind of go up and down with the love scene.

I’m so separate from that world so much of the time because I’m in the spy world, you know, it would be nice to interact a bit more with the group as a whole.

On what could split Chuck and Sarah apart in season three: