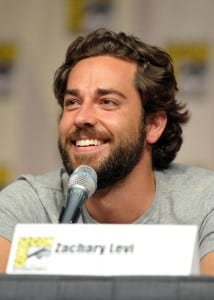 SAN DIEGO “" Beyond the facial hair and the spy stuff, Zachary Levi and offscreen and onscreen buddy Joshua Gomez seem to be the same guys they play on the show. Nerdy, charismatic and with a passion for fun, the guys stole the show during the press room, yelling back and forth to each other and causing laughter with everyone they spoke with. Blast wasn’t lucky enough to catch Josh Gomez again, but we were able to chat with Zach Levi, the title “Chuck” on NBC’s spy drama.

On who inspired the beard, Josh Gomez or Zach:

I think that I’ve actually inspired his [beard]. We’re both lazy. That’s really what it comes down to. I have to shave every day for work, so when I’m not having to work, I’m not shaving. I boycott shaving. I’ll trim it. I keep it clean. You’ve got to respect it. My girlfriend’s fine with it, so it’s like rock and roll. Do it.

On getting to join in the action:

It was really awesome. I’ve been sitting on the sidelines for the past two years watching Yvonne (Strahovski) and Adam (Baldwin) kick ass and I’m like, honestly, I’d really like to be a part of it at some point. I was kind of frustrated. We got to that scene and we didn’t have very much time to shoot it. I wanted it to be even more kick ass. I felt like it was good, it was cool and it was kind of half way between the comedy and the action, but I kind of wanted it to be straight action. I wanted to be awesome-born, and I was a little noodle-y. I was a little noodle-y and I wasn’t happy about that. But other than that, it was fun.

On the “Chuck” phenomenon:

I read the pilot back when I was unemployed and I was like, this is an awesome show. This is a show that I’d watch, this is a show that I’d love to be a part of, certainly not getting my hopes up too much at that point, and then I got the job and I was like, wow, hopefully the pilot will be good and we’ll get picked up and we did and then, coming down to Comic-Con the first year when we premiered the pilot, we were in one of the smaller halls, there were still a lot of people there but not anything like this. I think that it is such a blessing to be able to do what I do, but more than that, to be able to be a part of a show that people love like this. That they will come out in mass and fill an entire hall, wear Nerd Herd shirts and Jeffster shirts and all this. Some of them just make it at home, like [gestures like drawing on chest] Sharpie, you know? It’s amazing. And I just hope that we continue to do the show justice and the fans justice because we’re not a huge ratings juggernaut, but what we lack in numbers we make up for in just sheer fan passion and fervor and that’s the kind of thing I want to be a part of.

On whether a “Tron Legacy” poster will replace the “Tron” poster:

I don’t know about that. It’s kind of classic “Tron.” And Bruce was on the show, although he is going to be in the new (“Tron”).