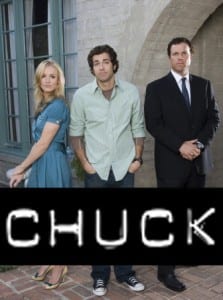 SAN DIEGO “" When Blast spoke with “Chuck” co-creator Chris Fedak last, he and Josh Schwartz were pumping up their game-changing second season finale, which they felt would ensure NBC to give them the greenlight for a third season. Well, their finale was gamechanging, and they got their third season, but Fedak wasn’t spilling the beans. Even having just come from a packed “Chuck” Comic-Con panel where Vik Sahay and Scott Krinsky performed “Fat-Bottom Girls” as their onscreen band, Jeffster, wasn’t enough to give us the details on season three.

On how much of season three is planned:

We know how, like last year, when we sat down to talk about [the season two finale], we knew our ending. I know my ending for the third season as well. So in some ways we go back and we build to that point of where we want to be. And it’s going to be super big and it’s going to be super exciting. We use super. I like super stuff. So we kind of know where we’re going. So right now the writers are half way through the season from a script-writing perspective, and then production will start; we’ll slow down.

On what season three will be about:

Chuck now has these abilities. How does he master them? Because it didn’t come with a manual “" or maybe it did and we haven’t seen it yet. And he has Sarah and Casey, not only there to protect him, but also to be the sensai, to help him master these skills. This is like the super hero story told in a little bit of slow motion. [“¦] [Season three]’s not going to so much veer away [from previous seasons], it’s going to evolve. For a story about a guy like Chuck, essentially you want to watch him get better at being a spy. You want to watch him master some skills, to be the guy who’s not just waiting in the car. And I think that that’s very much where the show is going. So it’s not much veering, but like an evolution. It should feel like this is where we want to go.

On whether the Buy More will be in season three:

On whether Tony Hale will return:

On the length of season three:

Right now we have an order for 13 episodes. NBC can extend that order like they did last season. If they decide to put us on after the Winter Olympics we could go longer. And there’s always a chance, because schedules aren’t written in stone, that they could move us up and have us come on earlier. “¦ We do have a hurry-up office, yes. We start production in a week and a half, so we’re getting close.

Last year when we started thinking about guest stars, thinking about the Michael Clarke Duncan’s and, you know, there was a lot of like crazy names out there. So this year, we’ve got this enormous list of just like all the people we love; you know, all our favorite actors, so we’ll go through it and figure it out. But we haven’t cast anyone yet but we’re circling the block. It’s not “Love Boat” but still. I love ideas. If there’s somebody you think should be on the show, you know … I think President Obama would be fantastic. However, someone who is an actor and somewhat available to the show, I don’t know. My “Star Trek” nerdiness means I would love Shatner. That would be fantastic. I don’t know. There’s so many people I think would be great for our show.

Zach (Levi) has been looking forward to kicking some ass for quite some time. I remember on the pilot explaining to him, “You know you don’t get to carry the gun, right?” and he was quite upset. We had many conversations. So he was super excited to have those abilities.