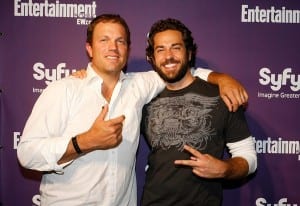 SAN DIEGO — Who would have thought that Adam Baldwin, the badass mofo behind “Chuck’s” Casey and “Firefly’s” Jane, would be one of the nicest, most charismatic actors at the “Chuck” panel? Granted, between the boys of Lester performing and Zachary Levi and Josh Gomez’s chemistry, it sounds like it’s something to top, but Baldwin quickly stole the show at the roundtables.

One of the big questions was whether there would be a romance brewing between NSA Colonel Casey and Chuck’s newly wed sister, Ellie.

In the second season finale, Chuck uploaded a new Intersect which gave him special kung fu powers “" and many more that are sure to show themselves in the third season.

“It’s gonna kind of throw a wrench in the works of Beckman’s plans” Baldwin said on the U.S. government’s response to Chuck’s new skills. “I don’t know. Like I said, he’s an asset even more so now, so we can utilize that. But it will be fun to watch him be sore. Aww, poor Chuck.”

The season finale was also the first time Casey had been seen with a military team that wasn’t Chuck and Yvonne Strahovski’s Sarah.

“I would love to have the team back, the SWAT team “" new ones, yeah” Baldwin said. “Casey’s looking for a way out, I think, but now that Chuck has extra skills, he might be even more of an asset, so he can use that, although there will be a rebooting period of lactic acid build up and sloughing.”

When asked if Casey will have a code word to shut off Chuck’s skills, Baldwin perked up and replied, “That’s a great idea” and then yelling across the press room, “Fedak, write that down!”

“Will you submit that in an e-mail?” he asked.

The one thing he would like to see as far as Casey goes is to meet Casey’s mom, Baldwin said.

“I want to know who she is. Now, it’s either a Mindy Sterling type, and I keep pushing that name because I love Mindy Sterling “" love her “" either that or the woman who played the Trunchbull in “Matilda” would be a great Casey mom” he said.