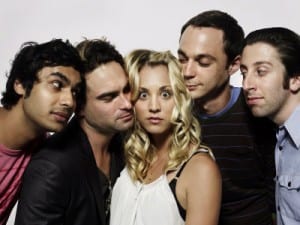 SAN DIEGO — Jim Parsons and Kaley Cuoco from “The Big Bang Theory” were on hand at the Comic-Con International, and took a few minutes after their panel to talk to the media. Parsons was nominated for an Emmy for his role as fan-favorite Sheldon and “geek goddess” Kaley Cuoco plays Penny on the show.

Jim Parsons on his Emmy nomination:

“It was like an out-of-body experience. Even now it doesn’t feel completely like it’s something I’m doing! I mean for one thing there’s nothing to do, it’s not like a job you have suddenly. But it’s like — I don’t know. The first thing that really threw me was when somebody asked, “Do you know what you’ll wear?” Which number one I think is weird because won’t I just wear a tux? But number two, it was the first time it really hit me that I would have to go. I don’t know, it was something I thought I would have to do when I was fifty? I don’t know.”

On the geek love at Comic-Con:

“This year there’s more people, but last year was really intense too. I don’t why it surprised me completely but it did. The warm embrace, I keep saying, and it really feels that way. It wasn’t til we got here last year and we were watching the clip reel, and it was like, oh, we are playing people who would go to Comic-Con. For some reason it didn’t occur to me in the same way until we got here. But everybody knows so much about the show when they ask questions so they ask such smart questions, such intuitive and knowledgeable questions.”

On whether he’s become more geeky since playing Sheldon:

I did have a scene in the comic book store once where I didn’t have much to say, and so I spent the time reading one. I don’t know which one it was because it was something I just picked up during shooting. But I had a good time?”

On the origin of his character’s quirks:

Kaley Cuoco’s character Penny is the beautiful and geek-friendly next-door-neighbor to physicist roommates Sheldon and Leonard. As Cuoco puts it, “Penny is their path to the outside world.”

On her stature in the geek world:

“That is so hilarious. I don’t know what’s happened! I almost want there to be a doll of Penny! Then I’ll know I’ve made it.”

(a member of the press corrects, “Action figure!”)

“This show has the best fans, they are so sweet. They know everything about the show! It’s kind of like you either know the show by heart or you’ve never seen it?”

“I’m not aware of anything outside of this table! Really, I’m not — people are looking at me at restaurants and I’m thinking I have something on my face.”

On the so-called “geek chic” trend:

The geeks are coming out of the closet! They’re getting laid left and right! They’re kind fo the cool ones now. The world is changing, people!

And last but not least: are they ever planning to fix the elevator?

“I get asked at question all the time! And people always say, “if they’re physicists shouldn’t they be able to fix it?” I don’t know! I don’t know, I think one episode Penny’s gonna fix it.”