SAN DIEGO — For the past 40 years, Comic-Con International has showcased celebrities and television veterans from Angelina Jolie to Joss Whedon. So it is a surprise to many that filmmaker Hayao Miyazaki of the beloved animations “Princess Mononoke” and “My Neighbor Totoro” has never made an appearance at Comic-Con. In fact, the elusive filmmaker didn’t even attend the Academy Awards ceremony when he won the Oscar for Best Animated Feature for “Spirited Away” (“Sen to Chihiro no kamikakushi”) in 2003. 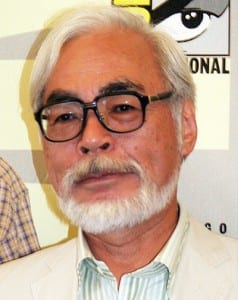 When the news was made official that Miyazaki planned an appearance to promote the American release of the film “Ponyo” (“Gake no ue no Ponyo”) fans of his films rejoiced all over the world. This also meant attendees would finally get to ask questions and gain insight into what inspires this gifted animator, whose beautiful sketches and storyboards have attracted the attention of Disney’s John Lasseter. Disney is producing and distributing the film worldwide.

Ponyo is a fantastic story full of magic and drama told through the view of Ponyo, a mermaid who leaves home and becomes marooned on shore without help until a young boy named Sosuke saves her. What gradually unravels is a love story full of lush imagery.

On Friday, audiences were greeted with an elaborate clip from the film which points to Miyazaki’s imaginative scope using color, movement and pace. In what is best described as a roaring undulant sea, shifting into shapes of large gigantic fish, a girl (named Ponyo) rides atop the crests effortlessly and freely. It is surreal, stark and beautiful. Alongside this image are a woman and child racing away from the threatening sea in a small vehicle. Audiences can feel the intensity as the waters tower and crash closely behind them.

It will be a memorable scene that American audiences will enjoy, especially when we hear it paired with the voice talents of Tina Fey, Liam Neeson, Frankie Jonas, Cate Blanchett and Betty White for the English version of the film.

Ponyo is a more traditional animated feature, not done in 3D or with computer graphics. When Lasseter was asked about the future of 2D and its relationship with rise of 3D animation, he said: “I’m always inspired by new technology. (We’re) the studio that completed the first animated film, and what I think is important is to let the filmmakers really understand the technology of what you can and can’t do with it.”

During the exclusive press round-table meeting, Blast asked Miyazaki about the nature elements in “Ponyo” and what else we’ll see in the film.

Miyazaki isn’t trying to make a statement about Global Warming or about the environment or politics. His film simply reminds us about the beauty of nature and the power of man’s own inner spirit — and that the two can be beautifully combined.

This combination of art, science, film and animation makes it fitting that Miyazaki has been given Comic-Con’s Ink Pot Award, one of the highest honors a guest can receive at this event.