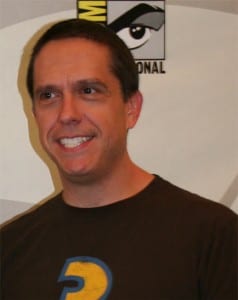 SAN DIEGO — “Toy Story” was landmark upon its release, which was already more than 10 years ago. Today, Disney introduced “Toy Story 3″ at Comic-Con.

Disney’s Lee Unkrich revealed little during a panel discussion. While most of the information is still a secret, he did allow audience members to find out about the new character to the franchise, Ken (Barbie’s counterpart) who will be voiced by Michael Keaton.

“We were not interested if it would have been simply an adventure on the road,” Unkrich elaborated on the motivations of this latest volume to the series in a round-table interview with Blast.

Unkrich elaborated that the film was personal to all involved and they wanted to create something worthwhile for audiences to enjoy as well as themselves.

“So much had past since the first film … all of us involved have had children, some of them have graduated,” he said.

And with the real passage of time, a new plot element unfolds.

Andy, the human boy character in the original film, is off to college in “Toy Story 3.”

This tidbit of information may be enough to offer fans an idea of how the film may go. With recent films such as “Up” it is possible Disney may attempt to include more serious themes into its films.

As far as the technology, “Toy Story 3″ is designed for a 3D audience. An exclusive clip of the film entertained audiences with visuals of Rex’s tail whipping around and the memorable little alien toys grasping their cute fingers outside the screen toward the audience. The clip even began with Buzz Lightyear walking into frame as if coming out from the corner of the screen and into the forefront.

Finally, while the third flick is far off, “Toy Story” and “Toy Story 2” are currently being configured for 3D as well — illustrating Disney’s continued dedication to the format.