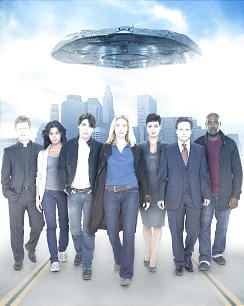 SAN DIEGO — The reboot of the 1984 miniseries “V” saw its pilot episode screened at Comic-Con International Wednesday evening to a crowd of several thousand attendees eager for the always anticipated Preview Night. Screened alongside the pilot for freshman series “Human Target” and “Vampire Diaries,” “V” was a standout thanks to its particularly solid cast.

Starring Elizabeth Mitchell (familiar as Juliet from “LOST” — and BLAST will be doing its best to get that question answered, by the way), Alan Tudyk (“Firefly,” “Dollhouse”), Morena Baccarin (“Firefly”) Morris Chestnut (“Boyz N the Hood”), and Scott Wolf (“Party of Five”).

Beware of Spoilers Beyond This Point

Shortly after, the sudden arrival of hovering alien motherships over Earth’s major cities triggers panic until the beautiful, otherworldly, and human-looking “Anna” (Baccarin) appears projected on the bellies of the massive ships (which are not as well rendered nor as cool-looking as the Galactica) and delivers a message. In gist, it’s “We come in peace” mixed in with “hey, Earth has something we need, but don’t worry we’ll be best friends with you and cure cancer and then be on our merry way.”

That certainly bodes well, doesn’t it?

We fast forward a few weeks to a point where humanity has largely welcomed and become enthralled with the “visitors” (“V”). This is the part that doesn’t ring quite true, even in context of this being a show about alien invasion. If giant alien spaceships that demonstrate clear superiority and just happen to electronically disable human jets that approach it, it seems difficult to believe that humanity as a whole would be, like, just so totally super excited to be, BFFs.

Thankfully, there are a few characters here and there who feel the same way. One of them is a doubting priest (Joel Gretsch) who questions the Vatican’s official position on the Vs (“we are all God’s creatures”) as well as one of his parishioners who staggers into the church, bleeding to death and begging the priest to deliver a package to a secret meeting.

Meanwhile Elizabeth Mitchell’s character, Erica Evans, is an FBI agent working with Alan Tudyk to uncover some kind of “sleeper cell” in a plot line that is very random and very unexplained. The lack of exposition is saved by the charismatic Dale Maddox, played by the always excellent Alan Tudyk (whose first appearance on screen prompted the biggest cheer of the night — Comic-Con is the natural environment for “Firefly” fans, after all).

The story moves along as V spokesman and leader apparent “Anna” encounters a middle-echelon broadcast reporter played by Scott Wolf. He asks her as she enters the UN if all the Vs are babes and she replies with, “You’re not so bad yourself.” The positive press coverage on her sense of humor inspires “Anna” in a very Big Brother-esque scene to announce to one of the other V’s that she chooses Wolf’s character Chad Decker to interview her.

One of the first hints of the Vs’ nefarious plots is revealed a few minutes before the interview is to take place. In short, Anna instructs Decker to ask only questions that cast a positive light on the visitors. When he tells her that it’s not a journalist’s job to spin, she threatens to cancel the interview and seduces the reporter with the promise of career advancement should he do as she asks. Decker casts away his scruples and relents.

The final act of the pilot culminates in Erica and Dale’s investigation leading them to some kind of warehouse. Erica enters first and discovers an anti-V rally, led by one guy who makes some very good points. He suggests that the Vs are reptilian-like creatures that cloned humans so as to appear human and asserts that the Vs’ reveal of themselves to Earthlings was merely the last stage in their plan to conquer the world.

Erica asks for proof and the doubting priest comes forward, bearing the bloody message given to him by his parishioner. Inside are photos of a mysterious terrorist suspect that Erica has been investigating and who she hasn’t been able to attach to any name or any of the many forged passports they found at a crime scene earlier. Just as the group of skeptics begin to put the pieces together — specifically that the man in the photograph is a V — they are attacked.

Shockingly, among these attackers is Dale Maddox, who tries to kill Erica until she manages to strike his head with a bar and discovers that the claim of the reptilian-like aliens wearing human skin is in fact the case.

The pilot ends with Erica and the priest, who both managed to survive the attack, realizing that they now need to form a resistance.

So what’s the verdict?

The potential for true drama and intrigue is definitely there. The interplay and politics of the Vs’ relationship with characters like Chad Decker and Erica’s V-obsessed teenage son could certainly be interesting and the gradual reveal of the Vs’ true intentions make for a promising story.

For the most part the writing was predictable at best and flat at worst. Several of the characters suffer from LOST-imitation-itis, which is to say that the writers are clearly attempting to create a diverse ensemble each with a interesting to-be-revealed backstories but unfortunately fall short. Characters like Erica Evans’ son, the priest, Ryan Nichols (Morris Chestnut) are all plagued with dull and familiar dialogue (a possible exception being Nichols, who is at the end revealed as a “traitor” V, an alien who fights on the side of the humans) that serves to make them feel like filler characters.

On the other end, of course, is Morena Baccarin’s fantastic performance as “Anna.” She is unsettling and somehow nonthreatening at the same time. Creepy, yet pleasant. On the whole Baccarin is the standout performer and her character Anna is certainly one of the most intriguing and unique characters on the show.

Visually, the show is clearly a pilot — the CGI shots are uninspiring. The cinematography, on the other hand, was nicely done and on the whole the pilot was edited superbly. There were many moments of great storyline juxtaposition and parallels that really contributed a lot to the sense that there is a lot of story to be told with this premise.

In all, it earns a B rating. Certainly intriguing but ultimately hampered by its lackluster plotting and general predictability. Despite that, though, it is absolutely worth a try when it arrives on screen later this year.