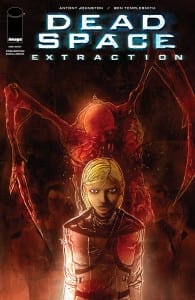 The comic will be on store shelves in September for $3. A limited edition version of the comic featuring exclusive cover art will be available for the special price of $2 at the EA Comic-con booth.

“There is so much more to the Dead Space universe than we could ever fit into one game and we’re excited to be working with Image Comics again to extend the story in Dead Space Extraction” said Steve Papoutsis, executive producer of Dead Space Extraction. “Ben and Antony did such a tremendous job with the original comic, we can’t wait for fans to get their hands on this special issue.”

Dead Space Extraction is the prequel to the award-winning Dead Space action/horror game. It ships September 29.

Five members of the Blast team are in San Diego for Comic-Con International!