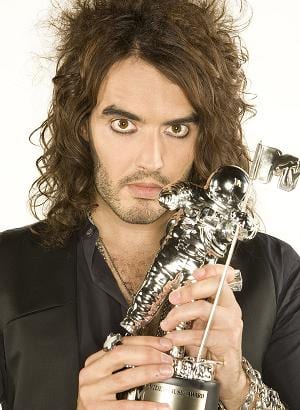 MTV has made a courageous (some might say well-advised) move by inviting the crazy-haired, English comedian Russell Brand back to host the 2009 VMA’s in September, according to MTV.com.

The courage comes after the consideration of all the controversy Brand stirred up on last year’s show, making fun of the JoBro’s purity rings and calling George W. a “retarded cowboy.”

But this year, Brand has promised to clean up his act…though fans of the comedian (me! me!) can probably see through his thinly-veiled charade.

“You have my word as an Englishman that there will be no controversy this year,” said Brand.

He added that he’s excited about seeing the JoBro’s again, though there’s no reason to believe that feeling will be recipocated. ‚ “I’m hoping that given their religious principles, they would have forgiven me,” said Brand. “I think they’re very sweet and lovely young men, and I would be thrilled if they’d be there in some capacity.”

Brand will be joined by the band Muse and pop star performer Taylor Swift.

Listen to his acceptance speech below!