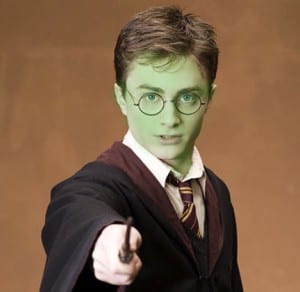 There are many dangerous things you can do in your life like going wand to wand with a wizard who wants to Avada Kadavra your ass. For the rest of us, our average everyday lives are typically much more mundane, so the most dangerous thing we do is bury our nose in a Harry Potter book we’ve read seven times over while walking through a crosswalk.

But, did you know that merely googling “Harry Potter” right now can be dangerous? In fact, with the release of “Harry Potter and the Half-Blood Prince” imminent, googling Harry Potter is almost a surefire way to land yourself in trouble “" and we’re not even talking about finding Daniel Radcliffe’s nudie pics from Equus.

Sketchy criminals are making fake websites that promise a link where you can “watch Harry Potter for free” “" and in the midst of a recession, who doesn’t want to save $10? They then fill the blog post with lots of comments lauding the virtues of the page. Link to a page full of screenshots from the movie, and prompt the user to install a “streamviewer.” One more click, and Accio! Your computer is now full of malware, and you’re still going to have to pay $10 to see the movie.

Presented like this, most Internet users would swear they would never fall for something this obvious, but the truth is that they do, and that’s why these techniques are still being used. This is complicated by the fact that the criminals are using the dreaded search engine optimization techniques to push their sites up Google’s result listings, and submitting their sites to Digg and Reddit, and pushing the files onto P2P networks.

The best way to protect yourself is something we’ve suggested to you before, and we’ll suggest to you again. Get‚  decent malware and virus scanners, such as the ones offered by PC Tools, and use them. We searched for any number of Harry Potter related terms writing this article and we didn’t die, so obviously the simple act isn’t inherently dangerous. Just be careful and smart.

And then there’s also the whole not being a sketchball and trying to download the movie illegally thing too. We’ll be with you at midnight tonight to see “Harry Potter and the Half-Blood Prince.”