PARAMUS, N.J.‚ — Hot Topic gets to have all the fun when the big movies come out. When Robert Pattinson came to the Saugus store last year, girls went nuts, we went nuts and it was all just very nutty.

We had a chance to ask a few questions to another rising British heartthrob, Mr. Draco Malfoy, himself, Tom Felton. Felton has been around since “The Sorcerer’s Stone” as the young, rich bad guy and the perfect foil character to Harry Potter’s goodness.

The craziness had us wondering if someone would create a Twilight-crossover “Team Malfoy.” Someone did. See the gallery below. It’s nutty.

Of course, Felton is no bad guy in real life, and the fans understood that on Friday evening. 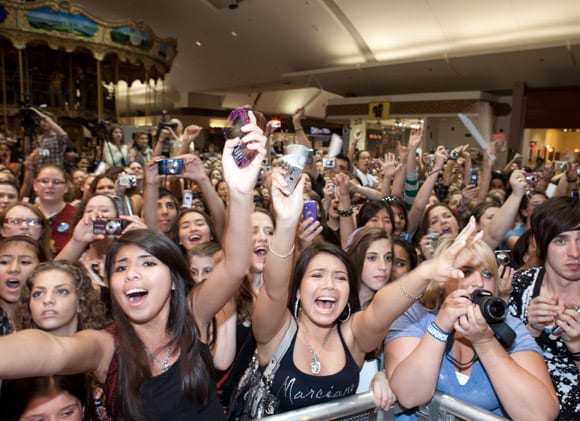 When he first came into Hot Topic with his girlfriend, (oh yeah, he has a girlfriend) Felton said he couldn’t believe all the Potter memorabilia. “I’ve never seen myself on a t-shirt, this is wicked!” he said. “Oh man, look, I have a Draco Malfoy doll! How cool is this? And there’s a Slytherin hoodie, I’ve got to have that!”

When asked what he thought about the 1,000 fans waiting to meet him, he said, “This is totally amazing. I’ve only been to New York once before, this is beyond anything I expected. I’ve not done a fan event before; this is a chance to show some appreciation to the fans. These films don’t happen without them.”

BLAST: This is the biggest film so far for your character “” we finally learn that there’s more to Draco than meets the eye. What was it like expanding your character in the sixth movie?

TOM FELTON: I love Draco, his complexity. The books are based on choices, and Draco doesn’t really have any.

BLAST: It’s been a good few years for young British actors “” have you been getting love letters from plenty of female admirers? Are you and the other actors friends outside of the movie?

TF: We’re definitely friends; you couldn’t spend nine years working with people and not get close.

I’ve heard that bad guys get all the girls, but so far I haven’t seen any proof of that.

BLAST: What are your hobbies “” what do you do when you’re not making movies?

TF: I love music, you can check my band out on YouTube.

BLAST: What’s been the most exciting part of the Harry Potter series so far?

TF: The bathroom fight scene. Dan (Ratcliffe) and I have been waiting years to kill each other, so filming that scene was great. We did our own stunts; it was a week of being rigged up in a bathroom filled with explosives, Dan and I were flipping around.

Blast would like to thank Holly Fussell of Edelman PR. John M. Guilfoil of the Blast staff contributed writing to this report from Boston.