Retro game revivals are nothing new, so it’s hardly surprising to see Square Enix milking Taito’s vast collection of 80’s-era arcade games. The latest is Arkanoid Live!, a downloadable revamp of the version that hit the DS a while back. For anyone unfamiliar with the concept, Arkanoid was a supped-up version of Break Out. Break Out, in turn, was basically a one-player cross between Pong and Space Invaders.

Essentially, you control a paddle at the bottom of the screen, and use it to reflect a bouncing ball back up to destroy a pattern of destructible blocks at the top of the screen. Arkanoid added a sci-fi motif and power-ups to the simple gameplay. It was never a complicated game, but offered a surprising amount of challenge. Playing Arkanoid today, however, it’s hard to image too many people taking it seriously. Even with the addition of lasers, aliens, rocket-propelled balls, and bizarre techno backdrops, the game is still incredibly primitive and, frankly, boring.

Even the presentation is remarkably spare. Although the game sports a plethora of overly busy and sometimes intrusive backgrounds, the game screen is just colored blocks and a simple ball. Even the aliens are basic geometric shapes. Some of them are balls that break up into more balls, thus confusing the action further. And adding confusion to the playing field is never a good thing here. The speed of the ball deflecting off blocks can be harrowing, and the game tends to add challenge by forcing you to try to navigate around unbreakable blocks. 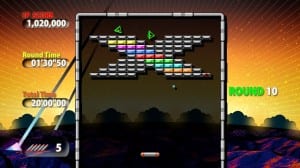 The developers wisely included the option to turn off most of the extraneous elements. You can toggle aliens and the backgrounds off if you like, giving the game a purist feel. It also makes the action easier to follow since there’s not as much eye candy on the screen.

Since the game is entirely based on simple physics, some of these levels can be absolutely maddening, and it’s a bizarre design choice that the Arkanoid doesn’t have any save functionality. There are four “episodes” in the single player story mode, each with 31 levels, and you have to finish all 31 in one sitting. This might have been fine in olden times when you were plugging quarter after quarter into an arcade machine, but is a ridiculous oversight now.

The inclusion of multiplayer is the shining part of the game. Basically offering a competitive puzzle game feel, two-players try to either clear all the blocks off their respective screen first, or just certain colors of blocks. There are multiplayer specific power-ups meant to thwart the other player, and a huge array of levels to compete in. In terms of casual multiplayer gaming, Arkanoid Live! isn’t a bad choice.

Blast Factor: At 800 points, Arkanoid Live! seems over-priced for what it offers. For fans of the arcade classic, it’s certainly a solid revamp, but the game simply hasn’t aged well since the 80’s. The multiplayer adds a definite value boost, but overall this one is strictly for the retro crowd.