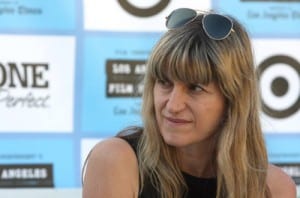 “Twilight’s” success at the box office was no mystery to us, but it was to many in Hollywood, and director Catherine Hardwicke now claims the biggest opening weekend ever for a female director, with just under $70 when the film came out last year.

The recently gave a very interesting interview with Reuters, in which she talks about the success of Twilight and what life AFTER the vampires will be like for her.

Q: “Twilight” cost $37 million and made nearly $382 million worldwide. Do you feel pressure to top yourself?

A: “I don’t think that’s possible, and I don’t think that’s a healthy way to think. “Twilight” was a phenomenon — the stars just aligned on that film. Thank God (director) Ridley Scott didn’t stop after “Blade Runner.” He made “Thelma and Louise” and “Gladiator” and a million other interesting movies. I still want to make other good films that won’t lose money.”