LONDON — Fashion is an obscure concept. The actuality of it lies in imagination, creation and the architecture and execution of design. Fashion can, however, be disciplined by seasons and “Ëœtendencies’ which are often very limiting.

In this column I won’t discuss seasonal trends or dictate or “Ëœrecommend’ what you should or shouldn’t be wearing, but I will write about people in the industry who are designing, creating and curating things of artistic integrity and worth. Fashion should be a form of self-expression; something that is personal and emotional, not something that is prescriptive, limiting or static. Not to say that this column won’t be biased; I plan to write only about people and things I like, it’s just up to you to decide if you agree.

A designer who I admire and adore is JCDC — Jean Charles de Cajabajac. This guy is a total fashion hunk. Suave and old school, yet incredibly contemporary, his designs are mad cool. And I mean, literally, a mixture of fashion insanity and cooler-than-cool logos and graphic designs.

Jean Charles recently brought his French label to London in the form of a fashion gallery in Conduit Street, and guess what? He personally and exclusively talked to me about why he chose central London as his destination of choice and how he plans to conquer the USA.

“I chose Mayfair because it is at the corner of two symbolic streets for me: Saville Row, where my father and I used to be dressed at Chittleborough and Morgan, and Conduit Street where my dear friend Vivienne Westwood’s store is located,” he said.

I asked Jean Charles if his connection to England had been effectively reinforced by having his own “fashion gallery” in London. “The fashion gallery is part of my universe, and this store is my place in England,” he responded.

What about a store in the USA? “I love America, that would be exciting!”

The central London store, curated by Anthony Stephenson, is definitely a fashion haven amongst the chaos of the city, and who knows the next stop for JCDC might be America?

Another designer you just have to know about is the lovely cutting edge menswear designer Katie Eary. She was featured in the recent English edition of Vogue and is set to go international any time. This is what I found out after a catch up (or rather, a mini interrogation session) with her on Facebook.

BLAST: When did you realize you wanted to be a designer?

KATIE EARY: I was always an artist at heart, and so putting my mind to anything creative was always enjoyable. But for me, The Saatchi Sensation exhibition was a turning point in my life. I became an avid fan of all things Brit Art! It was also a wake up call! How was I going to make an impact? If Emin, Hurst, Quinn, Lucas (the list is endless) were doing all this cross-examining of taboo subjects how could I make my own impact? Everything seemed to be exhausted in all areas of creativity… All this except maybe Menswear. And so, 14 years later…

BLAST: “¨If you could describe your style in 5 words, what would they be? 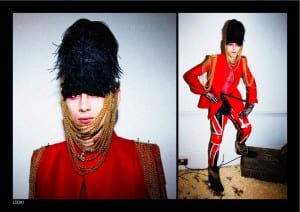 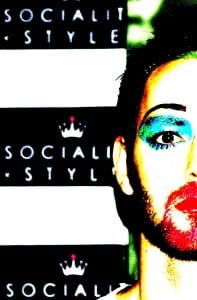 BLAST: You were recently featured in Vogue, how did it feel being featured in the most famous, most respected fashion publication in the world?

KE: I love Vogue, they have been so, so supportive, and to actually be featured is a real honor, and feels great to believe that they believe in me.

KE: My Black Hearted- but in general everything by PJ Harvey.

A music /fashion star that you have to look out for is a singer named Mpho ( pronounced: mmm fo). She is releasing her debut single Box N Locks in July. The music video is influenced by an 80’s pop Bowie esque style and Mpho’s fashion sense is a mix between Lady Gaga Futurism and Beyonce sassy-ness. Check out the bright orange mirror top with larger than life shoulder pads in the video below — such a crazy cool look.

Well that’s it for now folks. Hope “y’all” enjoyed my first column. Don’t forget to log onto my blog for even more info on not just fashion, but music and art‚  as well.