The Twitter-verse is getting more and more crowded with sites that want in on a piece of the buzz. For example, there are six URL shorteners supported by TweetDeck alone “" this and URL shorteners are still of arguably questionable value. Who knows how many Twitter clients are available on the App Store. Likewise, we count four services that will tweet a link to a picture. Well, now there’s one more “" but this one’s a heavyweight. 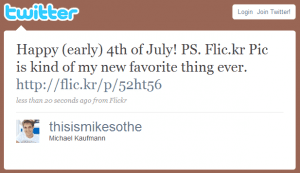 Likewise, mobile users can email the photo to their own special email address, putting their tweet in the subject line of the email. Flickr, long the king of publishing APIs, has also published one for this service, meaning it’s very likely you could see Flic.kr integration in all of your third-party Twitter applications.

Of course, if you’re still scratching your head and thinking “what’s the point of Twitter anyway?” this is likely of little value to you and you probably already stopped reading. But for those still with us, Twitter could see a second Oprah-like rush of users join from Flickr, which is only a good thing for everyone else using these services.