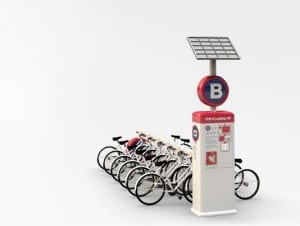 It’s all the rage to ditch your car for a bike these days in an effort to be green. Even still, a bike can be a serious investment (sometimes we think we’ve spent more on our bikes than on ourselves), especially if you mean for it to become your primary transportation. This initial hurdle is what keeps so many people from bikes.

A new start-up coming to Boston hopes to revolutionize the bike-rental market in much the same way Zipcar has revolutionized the car sharing market. BikeNow hopes to set up a series of solar powered bike stations in and around Boston, Brookline, and Cambridge, where users can swipe a membership card, pick up a bike, and ride off into the sunset. When you’re done, drop it off at any dock, and you’re all set.

Many cities “" Amsterdam and Paris spring to mind “" have implemented a similar bike sharing program, and it has changed the face of those cities. Many more people have left their cars at home and hopped onto their bikes to travel, cleaning the air and unclogging the roadways. Now, with technology supplied by B-cycle, BikeNow wants to do the same state-side, starting here in Boston. 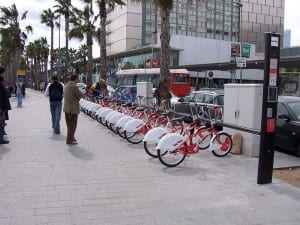 The company intends to generate revenue through membership sales, helmet sales, and by selling advertising on the stands and bikes. Provided it can get the venture capital it needs to get off the ground “" right now, about $2 million “" the company intends to roll out about 1,500 bikes at about 150 locations. And with founders who represent entrepreneurial and financial professors at Boston University, Cambridge councilmen, and the owner of Boston Pedicab, they just might get the money they need.

Anyone who wants to use the bikes will be able to as long as they have a credit card to insure the bike, although discounts are surely to be had through the membership program. The company also plans to GPS tag the bikes, allowing users to look at all the data they generate on the bikes, from distance traveled, to their carbon offsets, which fits neatly into our data obsessed generation.

Certainly a cool idea, and one we hope comes to the city sooner rather than later. While Cambridge (.pdf) and Brookline have a healthy network of bike lanes, Boston has exactly one which spans Commonwealth Ave at BU “" hardly all that useful. A program like this one could work with our city to drive Mayor Menino to actually live up to his pledge to make Boston a truly bike friendly city.

We would embed the company’s infomercial below, but it auto-plays, so head to their site to see it.