We here at Blast are a bit smitten with Muramasa: The Demon Blade. Why? Well, we like to think we have taste, and we love style, and those of us who played it also loved Odin Sphere, which Muramasa is the spiritual successor to. The game is unarguably one of the most beautiful to grace this generation on any platform, despite appearing on Nintendo’s little white console. Vanillaware, the developer, makes some worthwhile, lengthy games with beautiful narratives, so there’s no reason not to be excited.

I haven’t had a chance to go hands-on with Muramasa, but we did spot Gamestop’s reveal for the preorder goodies. Check this out: 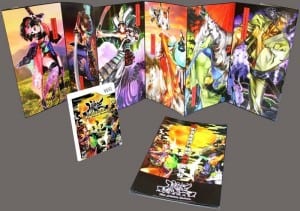 Click to enlarge that pic, (and you will want to). That’s a giant wall scroll for those who preorder. The other news that I thought was good was that Gamestop put a release date of September 1 down for Muramasa, but after speaking to Ignition, I’ve learned that the date is not a release date confirmation. They did say that the game should be out early that month though, so keep your fingers crossed that Gamestop is just psychic.