Released episodically on the PC almost two years ago, Sam & Max Save the World should prove to be a great joy for old-school lovers of point and click adventure. How many of such gamers migrated to console machines since the early 90’s, however, is up to speculation. For newcomers to this classic genre, Sam & Max could prove to be either a blissful blast from the past or a perplexing taste that most will completely fail to acquire.

Containing six separate but related episodes, Save the World is a fairly meaty adventure. Each episode ranges from two to four hours, making this downloadable $20 title longer than most full-priced releases. That said, those 20 hours (give or take) only really work if you can buy into the gameplay style offered here.

For those not familiar with what most refer to as a LucasArts-style adventure (the original Sam & Max Hit the Road was one of the shining stars of the late 80’s/early-to-mid 90’s LucasArts adventure collection), here’s the rundown. Basically point and click item hunts, these adventures task the player with moving from location to location, hunting for items, checking out every interactable thing on the screen, and enjoying a plethora of snarky comments along the way. Sam & Max in particular is billed as an interactive sitcom, and these episodes certainly play out for absurdist humor. 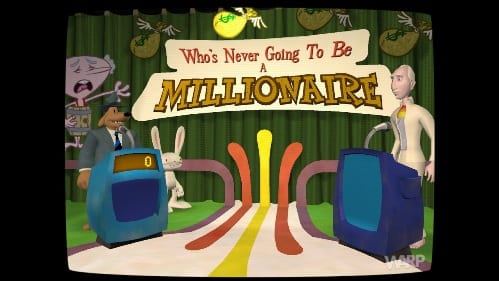 All those collected items inevitably form the basis for solving the various puzzles in the game. You’ll find eclectic, often nonsensical use for tear gas, Swiss cheese, bowling balls, video tapes, and a wide array of other oddities. Combine objects or use them on the characters and environments to advance, thus providing fodder for new gags. And make no mistake, Sam & Max is really about the gags and the dialogue.

Sam is a big dog and your controllable character. He’s the straight man to the psychotic rabbit-thing Max. Together they’re a pair of freelance police (private dicks really) in a surreal cartoon landscape of brain-washed child actors, conspiracy-theorist inconvenience store clerks, crazy psychotherapists, cops, robbers, and other bizarre takes on noir stereotypes.

Save the World is essentially a direct port of the PC version “" only with all six episodes available right from the start “" and this is perhaps the biggest problem. You move Sam around by clicking the area of the screen you want him to go, which is a clunky control system on a console. The game doesn’t exactly scroll from location to location smoothly, and having to use a mouse cursor to interact with everything simply doesn’t work well with a game pad. The exception being the occasional mini-game, such as a really awful driving sequence that feels completely pointless and plays even worse. 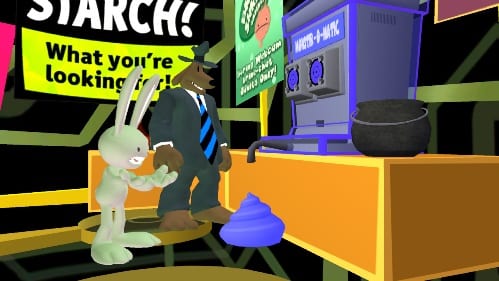 The other issue is that the dialogue is mostly amusing, but often seems to be straining. It’s clear the writers were trying to be clever and take on not just private detective clichƒ©s, but also modern topics like the Internet, child stars, work-out videos, and apparently any random thoughts that crossed their minds. Unfortunately, the dialogue isn’t nearly as clever as it wants to be most of the time. The game is still fun, but after a while, the characters become a bit too predictable and clichƒ© in their own right.

Blast Factor: For classic adventure game lovers “" especially past fans of the series “" Sam & Max Save the World is a must-have addition to any gaming library, but most of those gamers probably already played the PC version two years ago. For console gamers, Sam & Max is a welcome opportunity to try something very un-console like, but it will certainly take some patience to put up with the out-of-date control scheme and hit or miss comedy. Still, it’s cheap, good looking, and charming, and there’s hours of bizarre item hunting awaiting the curious gamer.

Sam & Max Save the World is available on Xbox Live Arcade for 1600 Microsoft Points.