With its latest entry in the Guitar Hero series, Modern Hits for the DS, Vicarious Visions is proving it is interested in more than just churning out bastardized versions of its top sellers to make a buck. A special guitar controller accessory and good song selection help to minimize repetition and song quality issues in an otherwise great game. Let’s start with the controller, since the idea of Guitar Hero on the DS might be confusing to some despite the previous installments. A four-button attachment plugs into the GBA slot of your DS, and you strum across the touch screen with a (provided) guitar pick. (Unfortunately, if you did splurge on a DSi, you are out of luck for now.) You hold the console vertically as you play (i.e. clockwise from the normal DS layout), which is helped by the guitar accessory, which acts as a handle of sorts. Like the console versions, you hold down the respective colored button as you strum (slash) across the touch screen with the pick. Whammies / extends are played by holding and rubbing the pick on the touch screen.

Although the complexity is somewhat diminished “" the console controller features five buttons vs. four on the DS “" the difficulty is retained because the note pace is increased. I hover between 95 and 99 percent on normal on the console versions of Rock Band and Guitar Hero, and I had a similar mark on Modern Hits. The most diabolical songs will require you to quickly scratch out 10 notes, followed by a normal rhythm for a couple notes, followed by some quick-switching chords, and then back to a flurry of notes. To sound like Led Zeppelin, the scoring system remains the same in Modern Hits. You get a base score for hitting each note, and playing strings of notes without error multiples your score. Certain notes contain energy power for your guitar, and if you collect enough, you can unleash it and double your multiplier for a span of time. In a clever usage of the DS’s microphone, yelling at it starts the power-up, which is far easier than the console versions’ requirement of hitting a button or holding your guitar at a 90-degree angle while still trying to play notes. The higher your score, the more stars you receive for completing a stage. 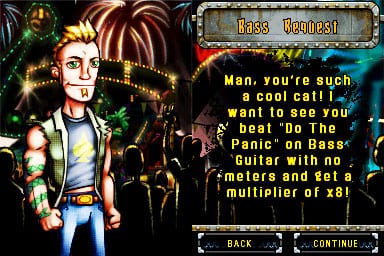 The limitations of a handheld version of Guitar Hero are smoothed over pretty craftily by the programmers at Vicarious Visions and the content selection. While the graphics and animation are severely downgraded “" there isn’t much real estate on the DS screen anyway “" the sound quality is shockingly good. I thought it was slightly above the standard set by most cell phones. The content is also smartly confined to modern music, so the scratchiness to some of the songs actually helps. “Reptilia” and The Strokes in general just sound better with a bit of roughness. The same goes with most of the game’s roster: The Fratellis, Wolfmother, Weezer, Coldplay, The Kaiser Chiefs, Sum 41, Lenny Kravitz, Modest Mouse. That’s a solid range within the “modern rock” sphere, from strictly indy to pop rock and pop punk. I didn’t notice a distracting lack of sound quality at any point, and because all modern music is used, every song is the original master as opposed to a cover band version. 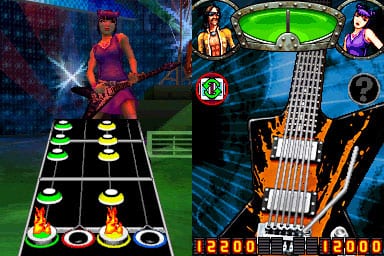 The only issue I had with Modern Hits was one of repetition. To unlock new songs, you typically have to beat the two or three songs at a venue, and then complete one, two or three “fan requests” at a venue. Fan requests are similar to the random challenges in the Rock Band games. For example, you might have to finish the bass part of a Strokes’ song above a certain percentage, or win a guitar duel. While this in itself isn’t bad, being forced to replay songs you’ve already beaten is somewhat annoying. I preferred the progression systems in World Tour (earn cash to unlock new venues) and Smash Hits (earn a certain amount of stars between all the game’s songs) to the one in Modern Hits, which forces a lot of backtracking. Still, this is a relatively minor quibble in the scheme of things.

Blast Factor: If the idea of playing Guitar Hero on your DS sounds great to you, then Modern Hits will be great to you. While it doesn’t really offer anything new from the console versions, Modern Hits doesn’t lose much in the transition thanks to some great song choices and its well-designed controlled adapter.

Guitar Hero On Tour: Modern Hits is available exclusively for the Nintendo DS, and is has a suggested price of $39.99